Sex And Monsters In My Pocket

Since the first time I saw what looked like Harry from Harry and the Hendersons fucking a girl while talking about big feet, I have been sold on Will's art and humor. Shit makes me laugh my balls out me nose.

These days, Nintendo has made a ba-zillion bucks cashing in on the popularity of Pikachu, Squirtle and Charmander.  But when I was growing up, I owned a creature that could have wiped the floor with any of these so-called “pocket monsters.”

I had the Antichrist. 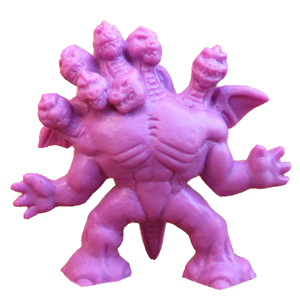 You see, before there was “Pokemon,” there was “Monster in My Pocket.”  Produced by Morrison Entertainment Group, and distributed by Matchbox in 1990, this pint-size toy-line started things off with a bang with its very first figure: “The Great Beast.”

The Great Beast is, of course, the seven-headed demonification of the Antichrist, as told by Christians in the Book of Revelation.  And he fit in my pocket.

Other figures included a slew of characters from works of literature, classic mythology, and international folklore.  In each “secret 12-pack” that my dad picked up from the local KB Toys, I found miniature versions of my favorite monsters, like Werewolf! Vampire! Zombie!  But even better, I discovered new monsters that I’d never heard of before, like Cockatrice! Manticore! Spring-Heeled Jack!

A handy checklist was included in each package to provide a little background info on the monsters, and rank them in order of an assigned value from 5 to 25 points. This was a great way to “prove” my theory that a werewolf (25 points) could beat a vampire (10 points).  However, I was forced to assume that my Mummy figure was modeled after Kharis, and not Imhotep, because he was only valued at a mere 5 points.

“Monster in My Pocket” proved to be a smashing success in the early ‘90s, and spawned over 10 additional series of mini-figures, a video game, trading cards, comic books, an animation special, and an exclusive fan club (of which I remain a card-carrying member).  I think the secret to this success was that these figures were not just marketed as “toys,” but were sold as “collectibles.”  And the product never seemed to speak down to kids, but provided a gateway to learn about new and different mythologies and cultures.  In a round-about way, these tiny monsters promoted diversity and encouraged the acceptance of others.

Now if only kids today could put down their Poke Balls, and play with the Antichrist, the world might be a better place!
- Will Penny 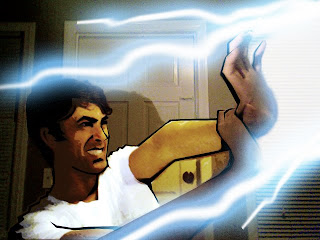 Will Penny is the mad creator of the webcomic “Sex and Monsters.”  He hails from the cornfields of Iowa, but calls sunny southern California his home these days.  You can read more of Will’s rants, raves, and comic strips at Sex and Monsters.
Posted by Guts and Grog Reviews at 2:10 PM