How I Became a Horror Loving Kid (Brobocop)

I first met Brobo while doing lists of top films by year. I then started reading his stuff which caused me to laugh so hard I came beer. He has since become a friend and I always am waiting for his next post. King of the gifs, bad ass of the bad, He is mother fucking Brobocop.

So, here's the story about how Brobocop (ME!) became a horror loving kid. I kinda went into this a little bit in my "What Halloween Means to Me" post over at Son Of Celluloid last month, where I explained that Creature From the Black Lagoon was prematurely my first horror film, and that I originally only saw maybe five minutes of it. In July of 2011, I did a review over on my blog for Silver Bullet, and went into how it was my honest first R rated horror film. So, with all this being said, I would like to start out with how I was a little chicken shit when it came to horror before I actually embraced it. Who or what was it that scared me? 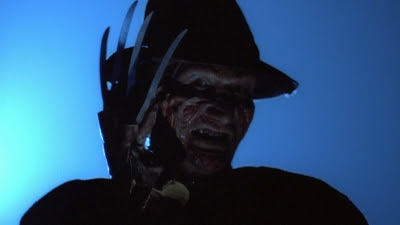 Fred Krueger. I was terrified of him, and didn't even know what the bastard son of a thousand maniacs looked like.

I'm guessing the year was 1985, and A Nightmare on Elm Street was premiering on HBO. My older sister caught wind of this through good ole TV Guide. She and my Mother were pretty big horror fans (not fanatics, mind you), so they were gonna sit up and watch it, as well as record it, for what would become many, many, many future viewings. Anyway, even being that I was about 7 or 8, my Mom had told me early on in the day that I could watch it with them. I was fucking stoked. Being that age and being given the OK to watch an R rated horror film felt extremely taboo and awesome. It's all I thought about for the remainder of the day, and well on into the evening before it came on. But as the time grew closer to the premiere, I chickened the shit out; told my Mom about a half hour before it started that I was tired and wanted to go to bed. So, even though I was honestly too scared to watch it, I was still very curious...

So, I left my fucking bedroom door open, which was a monumental mistake.

I couldn't see anything, because my room was in a hallway, and after that came the kitchen, then came the TV room... but I could hear EVERYTHING. Thinking about it now, had I grew enough balls to actually watch it with them, I'm not so sure it would have affected me as badly as it did. It probably would have fucking freaked me out, but there wouldn't have been any mystery. I think that's the worst; being scared of something uncertain. I laid in my bed in a fierce sweat while faux shitting my Underoos for the entire runtime. If I weren't so damn scared, I would have gotten out of bed and shut my door, but fuck that- I had a bunk bed and slept on top, so my thought was that anyone could be on that bottom bunk just waiting for me to make that error. And another factor, had I gotten up and shut the door, I would have been in a dark as hell room by myself- so double fuck that. I laid there with the door wide open, listening to what sounded like 90 minutes of pure anguish. The music was creepy, the screaming was creepier, and his (Fred) voice was absolutely unsettling. I remember yelling for my Mom at one point and her coming to check on me, while loud cackles from my sister crept through the house and into my bedroom... taunting me. My Mom told me I should close the door, and I declined. What a fucking douche nozzle I was.

Now, I can't remember how long it took, but I didn't sleep right for a long ass time. Furthermore, it took me at least 8 months or so before I mustered up enough bravery to watch an R rated horror film. I guess my Mom caught Silver Bullet one night and figured it was tame enough, because that was the film that she broke me in with. I loved it. I loved the werewolf, I loved Gary Busey and Corey Haim's chemistry. Though, back then, I didn't understand chemistry; I just wanted to be the kid and I thought Busey was funny as fuck. To this day, werewolves are still my favorite monster and Silver Bullet is directly responsible for that. It holds a huge place in my heart, and always will.

Anyhoo, I remember bragging to my sister that I had watched a horror film. Once I told her what it was, she replied with "Okay, let's watch A Nightmare on Elm Street." Uhhh, NO. Still wasn't ready for that. Honestly, I'm not sure how much longer it took, but it was within the year. And somehow once I did, I wasn't scared at all. The movie honestly changed me. I watched it on the daily. Then part 2 hit video. My sister at the time hated it- I guess she felt it had lost the scares and charms of the first. But me- I was somehow automatically convinced that a horror film couldn't scare me anymore anyway, and I was right (at least until I got older and thought about horror films that had realistic scenarios, and was and still am able to be scared from time to time). I just loved the movies for the character and all the messed up shit he did. By the time Dream Warriors came out, I had my Mom buying me tickets to go see it with a friend. My bedroom walls went from E.T. posters and Empire Strikes Back bed sheets to Fangoria Magazine pictures and Elm Street video store promo posters. I guess I was kinda obsessed. I even made my own ghetto Freddy glove before a toy company brought them out. I started watching Friday the 13th and Halloween films like a motherfucker, but Krueger was always my favorite as a youngster. It took time for me to appreciate Jason and Michael more than Freddy.

Well, that's about the size of it! For a long time, and after I got over the scared shitless speed bump known as A Nightmare on Elm Street, horror films were the only thing I watched, minus wrasslin'. I have fond memories of USA Saturday Nightmares and Cinemax's Full Moon Madness introducing me to the likes of Puppet Master and Cellar Dweller. Later on, I began to re-embrace other genres, such as Sci-Fi operas and 'so bad they're good' Cannon action films, and more... but horror was, is, and always will be at the center of my soul.

Back Online. Back On Duty. 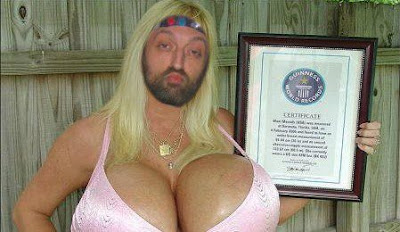 I'm a kid stuck in the body of a 35 year old douche bag dude with giant tits. Sick jams, flicks, booze and weed... that's all the fucks that Brobocop needs!