Freddy Goes to Space and Takes on Little Monsters


Today we have Johnny from Freddy in Space, a blog I have been reading for a Christ age. The amount this gentlemen blogs seems impossible. Whether he is home after the dentist, high on painkillers watching not only the first, but also the second dentist movie and telling us about it, or just keeping us up to date on DVD releases and some of the most unique horror findings out there. He is one busy dude that you should check out.

Since I barely have time to get all the blogging done on my own blog (Freddy In Space...cheap plug!!) that I need to get done, I generally don't have the time to do guest posts on other blogs. I sure wish I did, but ya know, between real work and real life, there just isn't all that much free time to sit around on the computer pecking away at the keys. But when your fearless host here at Guts & Grog, Eric, pitched me on the idea of taking part in his Kids Horror theme week, there was simply no way I couldn't join in the fun. There is nothing I love more in this world than the cinematic fusion of kids and monsters, whether it's kids fighting monsters or kids befriending monsters, and perhaps no better example of the awesomeness that can result from that fusion than Little Monsters, one of my personal favorite movies all of time. The slot to talk about the film was still open when I got back to Eric, and I wouldn't have felt right about not being the one to fill it up. So let's fill it up!


Made in 1989, Little Monsters had a simple but incredibly brilliant premise, combining the childhood fear of monsters under the bed with the kid friendly monster craze of the time, as seen in everything from movies like The Goonies to toys like My Pet Monster. In the world of Little Monsters, monsters really do live and breathe right under our feet, and they have access from their underworld into our world through portals underneath the beds of children across the world. There are good monsters and bad monsters, just as there are good and bad humans, and it's a good monster named Maurice that Fred Savage's character Brian encounters and befriends in the film. When his little brother Eric (played by Ben Savage!) fears that monsters are living under his bed, Brian decides to switch rooms with him, and prove him wrong. Thus begins the incredible friendship between Brian and Maurice, a friendly, and totally manic, blue skinned monster with a blue mohawk, a rockstar personality and a stomach allergy to AA batteries, played to perfection by Howie Mandel, who had previously provided the voice for another loveable monster from the 80's; Gizmo. Much like Mandel in real life, Maurice's job is to prank kids while they sleep, and do things that are going to get them in trouble when their parents wake up, like smear chocolate syrup hand prints all over the fridge and stick gooey ear wax into the cotton swab container. It's all fun and games for Maurice!


Little Monsters was a childhood favorite of mine, and it still to this day is my comfort movie, that one movie everyone has that they put on whenever they're feeling down, to lift them back up again. It never ceases to put a smile on my face, and I typically find myself popping the DVD in at least a couple of times every year, to remind myself what it felt like to be a kid. Little Monsters is truly every monster kid's wildest and most magical fantasy come to life; having a real life monster for a best friend, hanging out with him all night in the underworld, watching that cute freckle faced girl you like while she sleeps and having your monster friend piss in your most hated classmate's apple juice bottle ...it all sounds slightly creepy and pretty damn cruel now that I think about it, but for any kid who cuddled up with a My Pet Monster doll while watching horror flicks and munching on Doritos, Little Monsters perfectly reflects the pure nostalgic bliss of being, well, a little monster. In a nutshell, that's precisely why I love it so much, and why I so often find myself revisiting it, to recapture that little monster that still very much lives inside of me.

What's great about the movie is that it's really a two headed monster; it starts off very friendly and fun, with Maurice and Brian bonding and laughing the night away together, and then in the second half becomes a pretty scary little horror flick, especially for children. Something I always loved about The Gate is how it didn't shy away from the darker side of things, and really thrust the kids into truly horrifying and dangerous situations, and Little Monsters is not without its horrifying qualities. At around the one hour mark, things take a turn for the scary when the dark side of being best friends with a monster rears its ugly head, and the two bad monsters are revealed; Snik and 'Boy'. Snik is essentially the villainous horror flick version of Maurice, a big badass blue monster with a serious mean streak. As for 'Boy', who Snik lives to serve, he's a character that would fit right in with folks like Leatherface and Patrick Bateman. Boy runs the underworld, and is flanked by an army of evil killer toys. Though he looks like a very human and highly innocent young school boy, we soon realize that Boy is actually a hideous monster who wears the skin of children (at least, that's the implication), to appear human. Oh and we also find out that if you spend too much time in the underworld, you become a monster yourself, a servant of the evil Boy's. Now if that shit aint scary, then I don't know what scary is!!

Blending together the kid friendly elements with the more horrific kids vs monsters elements, Little Monsters is the absolute perfect movie to help usher kids into the world of horror movies, and I personally cannot wait to show it to my future child, the same way my parents showed it to me. That's gonna be a magical night that I highly look forward to. Watching it nowadays makes me seriously miss the days of real family friendly horror movies, which these days seem to all be sanitized and animated, when they even do get made. Little Monsters fits right alongside Monster Squad, The Gate and Gremlins for me, all magical childhood favorites that I will forever cherish.

I would like to use the remainder of my time here on Guts & Grog to do something I've always wanted to do; eat a peanut butter and onion sandwich, the food of choice for Fred Savage's character in the movie. Last night, I went out and bought an onion, a bag of bread and a jar of peanut butter, the latter of the chunky variety. In the movie Savage prefers creamy, but I'm more of a chunky kinda guy. Also grabbed a bag of Doritos to eat with the sandwich, which seemed only fitting being that Brian lures Maurice out of the underworld early on in the film by spreading Doritos out on the floor. So let's put this Little Monsters style meal together and see what it tastes like, shall we?!

Gotta say, this sandwich isn't half bad! As a fan of both peanut butter and onions, I quite enjoyed it, though I'd probably have to tone down the onions next time I make one. Wanted to stay true to Brian's onion heavy recipe, which totally gave me an unexpected cleaning of the sinuses. In fact, I ate the sandwich about halfway through the movie, over an hour ago, and I'm still feeling the effects of it. Will likely reserve future consumptions of this meal for future viewings of Little Monsters, because the joys of eating one would probably be all but gone if you were to eat one without watching the movie. So I guess it's not the best thing ever, but eating one at least once in your life, while watching Little Monsters, is a bucket list goal every monster lover on this planet should have, and should achieve!


With that, it's a goodbye from me here on Guts & Grog. If you haven't had enough of me yet, you can find me over on Freddy In Space, and even more frequently ranting and raving on the Freddy In Space Facebook page! 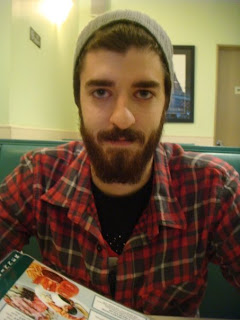 Posted by Guts and Grog Reviews at 6:31 AM

I can't believe he did the sandwich. That's messed up dude!

It was just something I had to do!!