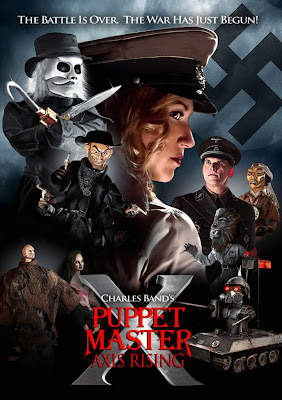 Blade's face is the first thing you see, it then zooms through his eye hole and shit starts getting real. We meet up with some Nazis who are hating on our freedom. There is a Dr. who is trying to make awesome dolls, but is not that good at it. An Ilsa rip off who has awesome Nazi titties, and a pissed off Hitler wannabe. They have their shit cut out though. They have to face two teenagers, a military nut, and the classic puppets. It is like a sitcom I once saw called "Two kids, puppets, and a sarge." Well, the Nazis realize they need some help so they create their own puppets since the Dr found the Re-Animator juice. They have a Nazi tank, a Nazi werewolf, a Nazi babe, and the most racist Japanese puppet since "Team America." Once the puppet on puppet action starts, you know this shit is going to own.

"Puppet Master" came out in 1989. It was the heyday of straight to VHS films. They had backing from a studio, and they looked amazing. Today things are way different. Is this the same as the first? Fuck no. There is no way it could be. It should not be compared to such. It is awesome. It is low budget. It is cheesy at times. It has a lot of heat. Don't go into this expecting eighties awesome. You will be disappointed.If you just wanna open up the chest and revisit your old pals such as Six Shooter, Blade, Tunneler, Leech Woman, Pinhead, and Jester and have a fun ride watching them fight Nazis. Order this shit now.

Tromeric
Posted by Guts and Grog Reviews at 12:09 AM