I have know Mortician Matt since the year that "Trick or Treat" came out. Holy shit. That is only six years after I swam out the dick. We spent many a day when we were suppose to be at school, hiding in one of our houses watching horror films, eating asinine amounts of food from the Canned Food store.  While not a regular contributor to the grog, he has always been a friend to it. He has sat through many a marathon, attended most of our grog party's and always been a supporter.


It’s a thrill doing this for the Grog, and as it turns out, I end up being able to do a list of something I truly love, animated horror. In this case specifically shorts and TV episodes. Due to the fact that there is a wild imbalance of quality in some shows contributions to animated horror, while others only have one or two really stand out episodes, I’ve made a rule that a given TV show can only have one episode on this list, otherwise we’d be looking at an incredibly dull and predictable list. Alas, get to fucking watching…


10. Drak Pack: Dred Goes Hollywood – Drak, Frankie and Howler get setup as the bad guys when Dr. Dred produces a film portraying them as children hating pieces of shit that pop the kiddies’ balloons and shit. Yes! Alvin and the Chipmunks Trick or Treason just didn’t quite make the cut because Drak Pack belongs here.

9. Lonesome Ghosts – A 1937 Disney short film about the Ajax Ghost Exterminators (Mickey, Donald and Goofy). Four Ghosts call up the exterminators and invite them over to fuck with their heads. Don’t get the wrong idea, Disney had some fantastic short films in the early years and this is one of the finest.

8. Looney Tunes After Dark: Transylvania 6-5000 – Holy shit! One of the all-time greatest Bugs Bunny back-and-forth’s ever as he goes up against Count Dracula in an abracadabra vs. hocus pocus duel of hilarity. The count trying to utter hocus pocus from under a rock is some terribly funny shit.


7. Scooby Doo, Where Are You?: Jeepers, It’s The Creeper – If you want to scare the shit out of a little kid, pretend to be The Creeper, it never fails, trust me. This one is a traditional Scooby formula with the best monster they ever faced, and a fantastic chase scene.

6. Beetlejuice: The Laugh of the Party – Lydia throws a Halloween Party and Beetlejuice invites the Neitherworld. SHENANIGANS! The best episodes from a fantastic animated horror show on in my formative years. My folks hated me watching this, so I made sure I never missed an episode, babe.


5. Tales from the Cryptkeeper: While the Cat’s Away – It’s the fucking Cryptkeeper! How could this not be included? This is the first episode of the show that introduced many a young monster to horror. You don’t fuck with the Cryptkeeper, or his shit or his monster security system will get you.


3. Garfield’s Halloween Adventure – There is so much good in this TV special I don’t even know where to begin. From the songs to the scary ass ghost pirates that not only scare the hell out of Garfield and Odie, but also make me have to change my drawers. It’s also funny as hell in a way only Garfield can pull off.


2. The Skeleton Dance – A 1929 Disney short musical film with owl, bats and skeletons. Pretty fucking cool, and probably the coolest thing Disney has ever done besides the 1951 animated feature Alice In Wonderland.

1. The Simpsons: Treehouse of Horror V – I’ve never considered myself a fan of The Simpsons, but the Treehouse of Horror episodes are almost always worth the watch, but this one is unsurpassed. The opening segment “The Shinning” might be the most entertaining 8 minutes of the entire series and it’s just the beginning. Later on we have murder and best of all, there is cannibalism! “Homework: Eat a stick of butter.” HOLY FUCKING SHIT! This shit slays me. The damn thing ends with a song and dance by the Simpson family wearing their insides out and Santa’s Little Helper eats Bart. 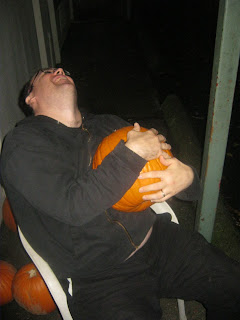 Mortician Matt is a musician and family man who knows more about wrestling than a grown man should. He has contributed to 411Mania and spends lots of time hiking and shit. His career involves picking up dead bodies that may or may not have "fallen" on their own.
Posted by Guts and Grog Reviews at 2:16 PM

That Looney Tunes cartoon at no. 9 has a REALLY annoying Youtubepoop video attached :(

Thanks. Not sure how I missed that. Took it down and added a picture.