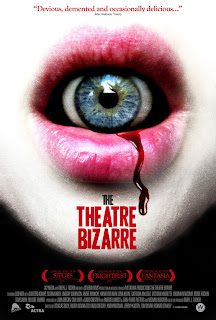 Look at that list of directors. Is it possible for my dick to be any harder. I will just list some of the things that these guys are responsible for. Hardware, Dust Devil, Combat Shock, Cutting Moments, Home, Prologue, The Wizard of Gore(remake), Night of the Living Dead(remake), and my personal favorite Subconscious Cruelty. That is just his directing credit. Karim Hussain also was responsible for how beautiful Hobo with a Shotgun looked as he was DP(not donkey punch you sick bastard) on that.  Tom Savini has created effects for some of the best films made in history(Maniac, Friday the 13th, Dawn of the Dead, The Prowler, and on and on and on). Most of these guys also take on other responsibilities such as editor, writer, and cinematographer. The cast is rounded out with all kinds of faces you will recognize. Debbie Rochon, Lynn Lowery, Udo Kier, and even Tom Savini himself.  All of these much different yet all equally amazing men come together and with the help of the one I haven't mentioned yet David Gregory who from what I can tell is the backbone of this put together The Theatre Bizarre.
Horror anthologies are not the most common sub genre in the modern age. We saw a lot more of them in the seventies and eighties. Creepshow is probably the most recognizable of the bunch but you of course had the TV shows turned movie anthologies like Tales from the Crypt(I guess that was before the TV show), and Tales from the Dark side as well as a few hits(The Willies) and misses(Campfire Tales) along the way. Recently we received Chllerama which was fun but definitely not perfect by any stretch of the imagination. The closest thing to a perfect anthology film would be Trick r' Treat and that is arguable if it even fits in the sub genre. Well History pulled straight out my ass 101 is over lets get our asses to the theater, and don't forget to turn off your cell phone and shut your fucking mouth or I will sick one of these madman on you.
I am not going to dissect these one by one as I want you to have as much fun watching things unfold as I did. If I spelled it out for you that would be like if the publisher of Scary Stories to tell in the dark decided to take out all the amazing artwork and replace it with more modern less exciting artwork, wait.......Sorry I can't get that off my mind. Seriously though. I am not here to ruin these so I will just give a quick overview of the film and you can judge my excitement. Things you will see in this movie. Eyeball injections, frog sex, human marionettes, crab vaginas, girls injecting themselves with unborn baby juice and so much more. Each of these entries have so much to offer and that is just the tip of the iceberg.I don't want it to sound like this is a shock film either. It has some obviously, but it also has some insanely beautiful moments. Douglas Buck's being the most notable. His story while being the least horror is the most heart wrenching. You also have everything from Lovecraftian creatures to highbrow cannibalism.
Seven directors, seven segments(including the wrap around) and two hours of everything the title promises you.

Posted by Guts and Grog Reviews at 8:41 PM