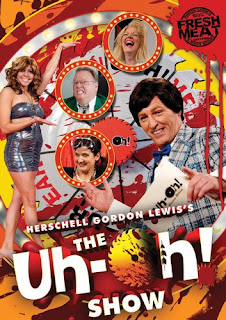 Herschell Gordon Lewis returns for the first time since his highly underrated sequel to Blood Feast.  Is he like most of the greats from yesteryear dried up like your moms vagina? Or is he flowing like the falls at the Great Northern?
I am hear to shout H.G. Lewis is still perfect at what he does. What is that? He makes movies to make money, they end up being super fun and have all the elements you want, so its a win win like that new wannabe Wes Anderson movie.
The Uh-Oh Show is what would of happened if Weird Al had asked Herschell to direct UHF.  It takes place at a network, they come up with crazy show ideas and battle evil. It's bassicly the same without that Twinkie bunned hot dog with cheese whiz thing. They have a game show where people are losing (that is for Son of Celluloid) their limbs to win some shit. You know what, that is all you get for plot. Did I mention this is a Herschell Gordon Lewis movie?
Herschell Gordon Lewis is the Godfather of Gore. He is kinda like your grandpa.  When your grandpa says something it's funny, where as if someone else had said it maybe not so much. When I was a kid I would steal my grandpas porno magazines, they were pretty outdated and the girls had huge 1984 bush but they were awesome and a big part of that is where they came from.  I could go to my friends and steal his dads modern porn but it just wasn't the same. What I am trying to say is any old man that loves porn is bad ass, Ala any old man that makes a movie where a girl shoots chocolate milk out of her titties into a child's mouth in homage to  an earlier film of his where this happens is way cooler than me and you should give him some respect.
With all the Herschell dick sucking aside there is a lot of fun to be had with this movie. Sure it is low budget, the acting is mediocre, and the story is convoluted but it  is super fun. I mean I laughed and laughed and laughed. So many in jokes to other films, the effects are just as amazingly bad as they were in his earlier films. All practical of course with the exception of a few fire and electricity gags, and the cast is obviously having a blast comparable to the one Jackie Onassis took to the face with her husbands brain.  Talk about a facial(sorry been watching to many JFK documentary's lately).Herschell tells the stories like a champ, Brooke McCarter took a break from chasing the Coreys(whose fault was that? I'm looking at you Haim) to host a game show and the man himself Lloyd Kaufman steels the show with his gritty portrayal of a pimp. I can already hear the Oscar buzz. It could be the sequel to Three Six Mafia's win for as they so delicately put it. "It's hard out here for a pimp."
OK. Final thoughts as I think I may of taken in to much of the grog and when that happens my hands just start pressing buttons. Like that, anyways final thoughts.  H.G. Lewis is responsible  for every one of the gore films you watch today, for that I thank him and quoted from some sticker machine somewhere "we will never forget."  They may not be perfect but they were always fun and always shocking for whatever reason and he still has it in him.

Tromeric
Posted by Guts and Grog Reviews at 8:44 PM