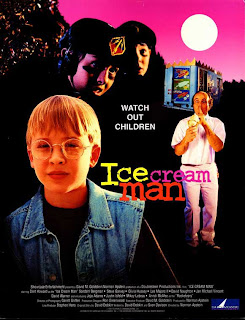 The ninety's. What a shitty time for horror films. Sure there were some exceptions but overall you got bullshit like I Know what you did last Summer and Urban Legend.  I remember watching this around the time it came out and thought it was pretty awful. Well I am here to tell you seventeen years later I watched it again and.......It's still kind of a piece of shit(does that mean I didn't enjoy it?).
Clint Howard likes Kids and Ice Cream. He like Big Worm drives and awesome truck and does some sketchy shit.  He feeds kids ice cream made out of other kids, he give a kid a case of Stockholm Syndrome and he asked a kid if he was trolling for tuna.  This dude is wacka doo.
There are so many people in this that have been in classic film and TV. I mean underage naked Juliet is a nutzo, Thomas Eckhardt  is a priest and that dude from Airwolf is a cop, and don't forget about the foreign wolf food. Yeah, he gets the shit killed out of him again.
OK. This is my turnaround. I am like Bonnie Tyler up in this hizzie.  This time through I still thought it was  a piece of shit. I however loved it.  So many great moments. Clint Howard putting on a puppet show for kids using severed heads, knocking out cops with ice cream scoops and well the main thing comes back to CLINT MOTHER FUCKING HOWARD.  His brother makes shitty movies but this guy owns me. Evilspeak, The Wraith, House of the Dead, Silent Night Deadly Night 4, and countless more badassary.
This movie is definitely something that needs to be watched under the right circumstances. Tonight I drank a fuck ton of Spider Bites and watched an old VHS rip of the Monster Vision episode with all the Joe Bob amazingness. Don't watch this sober, don't watch it if you want to see quality. If you have some time to kill and want to enjoy the bad put this shit in.
Why have Ben and Jerry not made a flavor out of this? Get on that hippies.

Tromeric
Posted by Guts and Grog Reviews at 11:36 PM

I had this one being like the Catalina Caper on MST3K, in that it's bad, but because it's a comedy, it's harder to riff on, because it's not taking itself seriously either, but it's jokes aren't as funny as it thinks they are. It's a movie like this where you can really test your riffing skills.