20. The Gingerdead Man 2: The Passion of the Crust- Silvia St. Croix

I was a little skeptical of this at first when I saw that Gary Busey wasn't doing the voice anymore. I loved the first one but overall it was by no means classic. The Buse was the highlight for sure. I of course still pre ordered it as it was a Gingerdead Man movie and also a riff on Passion of the Christ to boot. Hell Yeah I want to see a cookie get crucified. It takes place on the set of a movie that might as well be the next Full Moon film and the Gingerdead Man fucks shit up. Oh did I mention a cookie gets crucified?

Texas Chainsaw is one of my all time favorite movies. I watched it when I was seven years old and it scarred the shit out of me, like running down my leg kinda shit. This came ten years later and is a completely different kind of movie. When I was younger that bothered me but I grew into this. I mean if he had tried to make the same movie again it wouldn't of worked. TCM 2 set the tone for a whole slew of other films and is a fun ride. Dennis Hopper having  a chainsaw fight with Leatherface as if they were in a Kurosawa film made my shit harder than taking meth from a Juggalo. Have you tried that? Its not easy. Some may even say it would be a miracle to pull off. See what I did there?

OK. I know I am one of very few that prefers this to part two. I just love this film. Jeff Burr, king of the sequels returns to the list with this and I have always loved it.  Sure its nothing when you compare it to the original but that's not what I am doing here. Viggo is in this and he will fuck your shit up real good. Long before Cronenberg got a boner for him he was part of the family that slays together. This movie is just fun as fuck. Burr has always talked about the studio bending him over so I can only imagine the badassary that this would be if he had final cut. The kills are fun and the music. Wow the music. I have been in love with this soundtrack since it came out. Death Angel, Obsession, Wasted Youth and of course Laaz Rockit with the title track. I have given myself so many bangovers listening to that shit.

So many bad ass new random creations in this one. From the man that co-wrote Honey I Shrunk the Kids and produced the original, Brian Yuzna.  See more shenanigans from Herbert West and love the gore. I do.

One of the most hated sequels on my list. I know I am gonna get some shit for this but I love this movie. Sure it holds nothing the original, the thing is I am OK with that. This is kinda ridiculous I mean a cenobite that shoots Cd's.  The reason I forgive this. This movie is fucking fun. Its a blast. A blast to your moms face even. I saw this with Pet Semetary 2 as a double feature at the discount theater when I was dick high and loved every second. Lemmy does a badass song for it and the effects are awesome. Pinhead has some his best moments from the entire franchise, granted he only has good moments in the first three. Talk all the shit you want but Hellraiser 3, as the great poets The Pretenders once sang "I'll stand by you."

He made The Prowler so of course his Friday is gonna be the best.  I could go on for hours on why this movie is amazing. I won't though. I will list a few reasons. The kills, Crispin Glover, Cory Feldman, Crispin dancing, Tom Savini returns, Crispin Glover.

14. Blood Feast 2:All U can Eat- Herschell Gordon Lewis 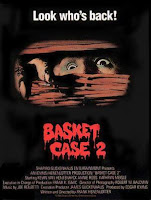 Basket Case was one of the great eighties NY sleaze movies and with the sequel he took it and made it better. Its not as gritty or dirty as the first but you get a whole batch of freaks that sing and dance and I love every second of it. Henenlotter is easily one of my favorite directors and this is a  prime example why.


Sleepaway Camp is awesome. Overall it is just your basic slasher flick with some brooootal kills and assholeish characters. What sets it aside is its twist ending that makes M. Night hate himself as much as I do.  Unhappy Campers came along and said fuck it, lets have some mother fucking fun.  This film sports some of the best kills in a slasher ever. Period. Great metal soundtrack and random famous peoples siblings. Oh and the happy camper song gets stuck in my head more than "Send me and Angel" by Real Life.


I love everything about the Puppet Master movies. I grew up waiting for the next one. They were like my Land Before Time and there were almost as many.  This gives you a little backstory and is fun from start to finish. You see where Blade was originated from and did I mention their are Nazi's? Yeah. Puppets killing Nazi's is pretty god damn epic.


Well only ten to go. How much do you hate me at this point? Just wait for the top ten.

I'm loving your list, dude! I may not agree with each one, but I love that you say why you like them. I can respect that. Look forward to the top 10!

Thanks a lot. List are always fun and I don't think its possible to make a list that everyone is happy with. That is part of what I enjoy. The act of making them is one of my favorite parts then hearing why people agree or disagree is the next best thing.