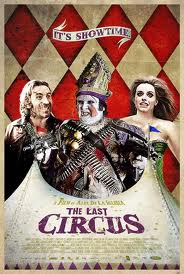 Clowns with machine guns. I assume I could stop this review right now and if you are not a pussy you would already be like" shit yeah I am gonna watch this." Thing is I am drunk and want to ramble a bit so fuck you.  The Last Circus is a Spanish movie with amazing visuals and a storyline that would make Terry Gilliam squirt knuckle children all over his pants.  I mean they would be running down his leg. Seriously.
We start off in the thirty's and a circus is overtaken by some military.  They get all these fucking clowns and give them weapons. Have you seen a clown with a machete? It's fucking terrifying.  These clowns are fucking shit up and the blood is spraying like it's 1969(I am insinuating Sharron Tate's unborn child squirting like it's a Evil Empire video). I don't want to ruin the plot as I don't do that. I am not Roger Ebert.  It doesn't matter. The visuals are amazing. The end is like Batman 1989 if made in Spain.


Tromeric
Posted by Guts and Grog Reviews at 6:02 PM