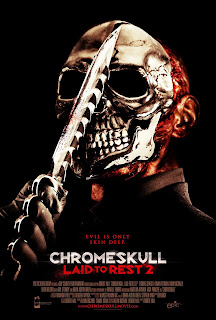 When Laid to Rest came out I wasn't sure what to make of it. I had seen Lightning Bug and loved it but kept seeing this random dude with a shiny ass skull. I of course went and bought it as I am like a meth head at an ICP concert. I just cant help myself.  Laid to Rest was a classic 80's slasher but made in the future. Nothing really important happened, the characters were as average as they come and it was a very basic plot. One thing did stand out that got me so excited and that was the kills. I have never been so excited by knife induced death. Robert Hall clearly knows his way around the special effects workstation. No bullshit here just kill the fuck out of anyone. I then realized this is a perfect slasher film. Kinda bullshit but the kills make up for it. I had used that argument for so many films such as the Sleepaway Camp sequels and countless other body count films. Not cop killer Body Count but lots of dead body's.
Move ahead to today and I have been holding my balls in excitement for Chromeskull.  Was it worth the wait? Read this shit son.
Chromeskull is insane. It takes the basic story from part one and says fuck you. Lets get insane. In the words of Gabe Nye the Science Guy "It's like Tom Clancy and David Lynch got in a fight with Jason Vorhees."   That pretty much sums it up. The plot is so insane that I don't know if I liked it or thought it was recockulous. The thing is, i don't care. It was so insane I let it slide. It's like not getting mad at a retard for eating his own ear. You know he's got a huge heart so fuck it.

Posted by Guts and Grog Reviews at 8:35 PM

I LOVED Laid to Rest and I'm PSYCHED about seeing Chromeskull.

you are in for a treat. Your mind will be blown. So out in left field.