There are three kinds of people, people that like Evil Dead the best, people that prefer Evil Dead 2 or people that live by Army of Darkness. I am in the first category but this isn't a top first film in  a series list.  I do however still love Evil Dead 2. He took the first one changed a bit and wrote the three stooges into it.  Classic by all means so here it is at number 10.

Troma is my childhood. I first saw their stuff watching USA Up All Night and continued to seek it out on VHS from there. I watched the original Toxic Avenger on a weekly basis. Two and three had their moments but I never felt strongly about them.  Then in the early part of the DVD golden age this bad boy showed up. I had seen the trailer so many times on Terror Firmer and when I got home and put it in. Wow.  So tasteless yet socially aware. It made me forget about the first two sequels. This movie also holds another place in my heart as the first time I met Lloyd Kaufman I had him sign my DVD and he coined my name. Tromeric. It made sense. Well Lloyd. Looks like you created another monster. 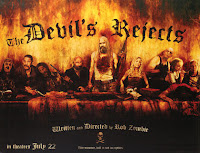 I had been following House of 1000 Corpses for years waiting for it to come out. I hadn't really been a fan of Rob Zombies music since early White Zombie but assumed he had it in him to make a bad ass movie.  It finally came out and I went to see it and enjoyed the shit out of it. It was nothing new, it wasn't gonna change anything but it was a fun ride.  I then heard he was doing a sequel. I waited curious and when the time came went and saw it. I was blown the fuck out of the water.  It was so gritty and brutal and funny and gory. I have watched this film so many times.  I know there is a lot of Rob Zombie hate and believe me I wish he would of taken some different roads than he has but one thing I will do is stand by The Devils Rejects.

I have watched this movie so many times. When I was in fourth grade I would stop by the video store on my way home at least once a week to rent this. It is one of the first movies I remember as soon as it was over rewinding and watching again immediately.  I to this day love the Dokken song. I watched that video so many times it wore out on the VHS.  I still to this day listen to it on a regular basis.  Dream Warriors is damn close to a perfect horror film for me. Its interesting, its funny, its got amazing kills, it was the last one before Freddy became super ridiculous and all the cast is amazing. I still think the first one is a superior film but for pure entertainment I always return to the suicide ward.

I love Phantasm and everything involving Phantasm.  Lord of the Dead is awesome. It's like the bad ass action Phantasm movie. A little over the top but I can forgive it due to the scene with like a thousand spheres fucking shit up. It's like bukake for phans.

This is the one I saw first. I was a little kid and found the VHS at the local comic shop for cheap and was like wow. Balls.  It's a fun film but it has the wrong Mike in it. Still love it and have some fond ass memories that go along with it.

The first time I saw this I was not a fan. I thought it was kinda boring and had a made for TV feel.  A couple years later I did a marathon and was confused as when I got to it I loved it. The story is so dense and interesting. I love seeing the back story and all the unused footage from part one. It's hard for me to admit when I'm wrong but my first impression of this was total bullshit.

One of the worst movies ever made hands down. I love it. I have seen this movie so many god damn times I should be put in an insane asylum.  So much has been said about this I don't feel the need to explain myself. I am a sick fuck and will leave it at that.

C.H.U.D. was a fun seedy dirty New York film about underground dwellers. It had the dude from Home Alone and Bushwacked.  F.K.U. wrote a song about it.  Then came part two. They said fuck it lets make a buddy comedy with a zombie that kicks poodles caused ruckus and loves meat.  I always can watch this no matter what my mood.

I wanted to include Ghoulies four just because Wynorski directed it but I just couldn't. It's kind of a piece of shit. This however directed by one of the best special effects dudes that drinks his own pee and directed the first Troll is so god damn good I could go on for hours. I won't as I really want to go get some huevos rancheros. It's like Animal House with things that come out of your toilet and say the funniest shit ever.


Well it has been fun. Again this list is not based of quality of film. It is a list of favorites for whatever reason. If  I did quality the three Phantasm sequels would be at the top with Evil Dead 2 right behind.  Well let me know why I am wrong and I will take a shot and forget about it anyways.

GREAT LIST SIR! Ghoulies 3 is amazing! thank you for recommending it. I got the chance to see Evil Dead 2 AND ANOES 3 in the theatre. Those times were 2 of the most amazing times I've ever had in a theatre.