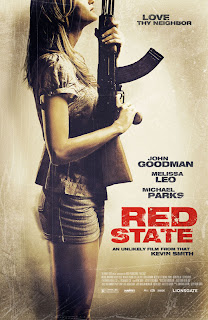 I remember watching Clerks in my box of a bedroom at my grandmas house when I was a teenager and laughing my ass off. Ninety minutes of hilarious dialogue about dicks and farts. I of course continued to check his shit and was a supporter till Jersey Girl which sucked a dick.
I heard about Kevin Smith doing a horror film and was kinda confused. Could he pull it off? I mean he makes me laugh in the same way I make me laugh. Childish humor that works for what it is. I then heard it was going to be loosely based on Fred Phelps and his gang of shitheads.  My mind was blown. Such serious subject matter? I am a pretty easy going dude and can find humor in things most people will shy away from. I know lots of humanity is fucked so I try and go about my business and do what I can but overall just have a good time till I take that permanent nap. With that said one thing that over the years has made me angry on so many levels is the Westboro Baptist Church. I mean I am not a fan of war but I am not going to go to a solders funeral and protest it. Jesus people. The hate that these people spout is beyond me. I don't have it in me to even hate them that much.  I won't go into detail as this is by no means a place for politics, its a drunk horror website for Christ sake. I am just saying that Kevin Smith picked something that automatically got me all raged up. Well the booze didn't help either. Well actually it did.
This movie is as gripping as a thirteen year old to his wang when he first found cinemax.  I couldn't look away. I was drawn in like the kid in that A-Ha video.  The cast is fantastic. Michael Parks made me want to punch him in the dick hard, which I assume is what he was going for. John Goodman. Do I need to say more. Kevin Pollak, Mark Blucas, Stephen Root, Kyle Gallner and well everybody was top notch.  This is by far Smith's most effective film to date and is just a great film all around.
The world would be such a better place if everyone would just pour it out. Pour what out you ask? The Haterade. POUR IT OUT.

Posted by Guts and Grog Reviews at 9:39 PM

Labels: Based on a true story, horror, Religion