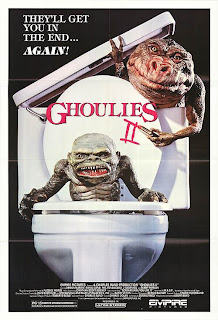 I love the Ghoulies. Anyone that has ever read my shit knows that. They are bad ass and come from a toilet. Three is the best, hell one of the best movies in general and Wynorski directed four. It kinda sucks but Wynorski is a God and used the suits from Troll for it. The first one is sweet and has Jack Nance in it. Yeah Eraserhead mother fucks, not to mention that Suicidal Tendencies video. He must of been more of a coke fan.  Well lets get on to this shit. Ghoulies 2 where they will get you in the end....again. Marketing genius.
The thing about all the Ghoulies films besides three is......they don't talk. What? I don't get it.  That's like if the first Homeward Bound was just a bunch of animals running around and not saying amazing things like "Birdzilla."  Let's make Babe: Pig in the City with a mute pig. This is not a Bresson film. OK. Fuck you.  With all that said. I can forgive this for a few reasons. The first being that these Ghoulies love W.A.S.P. Yeah. Blackie Lawless screams until we like it. The second is Royal Dano. He is playing a different character than I am used to. Yeah, he doesn't even have a dog. Crazy right? The third reason is Ghoulie puke. Yeah these assholes puke on so many people it's like a Lucifer Valentine flick.
Well what are you waiting for? Marathon this shit.  Four movies that's only like six hours. Get a bottle and some friends and enjoy.

Posted by Guts and Grog Reviews at 9:04 PM