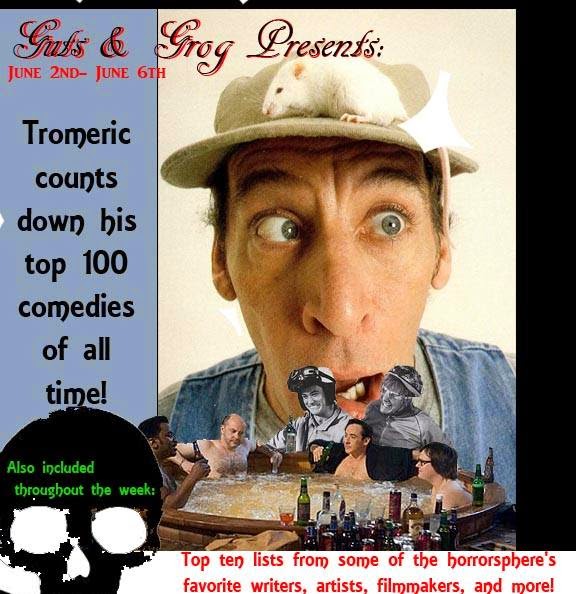 Here on Guts & Grog, we mostly focus on horror. It has always been my strongest love, but I do delve into other genres, and comedy has always held a special place in my heart. I don't love all comedies. In the mainstream, comedy has went in phases where I enjoy it sometimes, and loathe it others. I grew up during the heyday of the eighties sex comedy. I killed numerous knuckle children to the likes of Porky's and many others. During the nineties, I was less impressed. Occasionally something would shine, but it was mostly too clean, and family friendly. Don't get me wrong, there are plenty of family films I love. This list will definitely show that my pallet is wide.

The other thing I want to address is the definition of comedy. As with most genres, many are split into sub-genres. It can get tricky, and confusing. Personally, I chose to include anything I felt was more comedy than anything. Examples would be The Burbs. Yes, it is a horror spoof, but it is comedy first. I chose not to include things such as Return of the Living Dead, or Evil Dead 2. Sure, they are funny as hell, but they are horror first, with humor added in. This is just for me. I know others would consider those films comedies, and in fact, many of the contributors have used such films. I am not here to say who is wrong or right. These are lists of preference. Comedy is subjective, like all great genres.

I am really excited to unleash this list. I spent weeks on it. Adding, and subtracting. Rotating, and changing. I also would like to thank every contributor for taking the time to share their favorites. I know that life is busy for most of us, and it means a lot that they were willing to take the time. I look forward to the conversations, and debates. I hope that you're reminded of films you forgot about. I hope you find new ones. I also hope that you may give some of these another chance, if you were not a fan initially. I have had my mind changed more than once, after seeing the love someone else has for a film.

The next five days will have my top one hundred, twenty each day. I will be mixing in lists from many other writers, directors, actors, and friends of the grog, throughout the week.

Make sure to keep up with all the posts on the Facebook page, or over on Twitter.


Lastly, I want to thank each of you taking the time to read this. It means a lot, and I look forward to hearing your thoughts.


- Tromeric
Posted by Guts and Grog Reviews at 5:58 AM

The fuck? There are no proper swearwords in this post. Who are you, and which filthy bathroom stall do you have Tromeric hog-tied in?