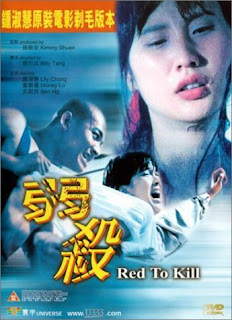 Did you see that guys neck? Holy shit. A category three classic full of kids exploding on impact, rape, the most offensive portrayal of the mentally handicapped this side of  Handyman.
So a dude and his brother are sitting while his mom is whoring it up his dad comes in and is gonna cleaver the dude when the mom straight fucks him up. The blood hits said kid in the face.  The kids start crying because they are pussies so the mom cleavers the brother and his blood hits him in the face.  Now she is going for him when she slips and pulls a Where the Red Fern Grows and her blood sprays him bukakke style. She was of course wearing a red nighty during this commotion so the kid get some weird hatred of red.  Jump ahead 20 years or so and any girl wearing red makes him want to kill and fuck, in that order.  It doesn't matter if they are twelve or tarded he will killfuck them. You see plenty of sick shit in this and you haven't lived till you have seen a mentally handicap girl scrub and shave her pussy violently while screaming "dirty" over and over again.   I will stop there as I don't want to ruin it?
This movie is kinda ahead of its time when you think about Serbian Film and the reactions it caused, granted no babies are fucked to death in this but the pure insanity, disgustingly brutal rape scenes that are filmed in such an erotic way its confusing and the complete lack of taste when dealing with the mentally handicapped. If you are a sick fuck and want to see some insane shit with a villain that is actually  terrifying but some of the scenes are so over the top you cant quite take it serious watch this.  If you have any morals at all I wouldn't recommend it, but hey if you have morals what the fuck are you doing reading this?

Tromeric
Posted by Guts and Grog Reviews at 2:11 AM