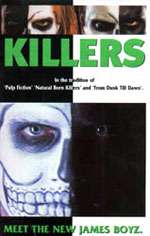 A movie that no one has heard of? Have you heard of the internet. That makes it hard mother fuckers.  Ten years ago I could of made a fucking list but now. I will try my best but I know at least one of you has heard of this.  I have went on and on about Mike Mendez. The Convent and The Gravedancers were both more bad ass than an aborted baby.  His first film Real Killers seems to be one that very few have seen and still hasn't been released to DVD.  I saw the video in Hollywood back a Christ age ago and thought it looked like total butt spit as it kinda looked like Insane Clown Posse was on it and I would rather cut my dick open with a page from the bible then watch anything with those methed out fucks unless its the Miracles video cuz that shit is hillarious like Bill Hicks except its not suppose to be, so I guess its funny like the bible. Anyways. Real Killers is bad ass to the core of the earth.  Its broooooooooooootal, high-larious and outrageous.  It has a twist that rules and is nothing like that M Night bullshit.  Watch this if you haven't seen it.  If you have call me out. I know there is nothing I can put that a page full of horror nerds hasn't heard of unless I went with something I made and haven't showed anyone. Real Killers bitches!!!!!

Tromeric
Posted by Guts and Grog Reviews at 12:04 AM