Day twenty brings us to killer animal movie. Really?  How can I pick a favorite?  Hey pick which actress from Burning Angel you want to have sex with, but only one.  I can't do it. I fucking love any movie with animals.  I don't care if its total shit I will watch it and probably love it.  I watch all this shit. The entire Maneater series. I rocked em. Movies with Gary Busey killing tigers. I'll stand by it.  David De Coteau made some movies with leeches or bears where its just a dude in a bear suit shaking a car. I will watch it and laugh the whole time. I don't give a shit.  There of course are the classics like Jaws or Alligator but aside from that you have Orca the Killer Whale.  Yeah whale abortion.  Night of the Lepus, fuck I am kinda scarred of those cute little bunnies.  Eaten Alive by Tobe Hooper or Rogue by Greg McLean were bad ass killer croc movies.  Crocodile and Crocodile 2 were fucking terrible but I loved watching the crocs save woman from rape scenarios. So many great killer bug movies. Arachnophobia, Them, Eight Legged Freaks, Ants.   Can anyone say Piranha?  How about the remake? The Asylums mockbuster Mega Piranha? That might be the best. All the mega movies. Mega Shark vs Giant Octopus, Mega Shark vs Crocosaurus. The Asylum also made Moby Dick 2010 which blew my mind like that girl from Necromantik blew that dead dude.  Speaking of sharks ummm Shark Attack with king of the straight to video Casper Van Dien, not to mention Meglodon  with the best pick up line ever. Lake Placid? Betty White talks bout dicks and sucking, part two with Bo Duke and part three that was way better than it had any right to be.  The William Girdler movies like Grizzly or Day of the Animals. He has something to say mother fuckers. The Boneyard with the giant Zombie Poodle, all the awesome crossbreeds like Sharktopus or Frankenfish?  How can you not love this shit?  Killer Dogs? Fucking Cujo, Mans Best Friend, or Devil Dog.  And don't forget Snakes. Python, Mega Snake, Jaws of Satan, Anaconda, Snakes on a Plane or the mockbuster Snakes on a Train.  These are all fucking priceless pieces of art you monkeys, speaking of monkeys can I say Outbreak or Monkey Shines?  Yeah well with all of these there is one movie that gives me the biggest nerd boner ever and that is...... 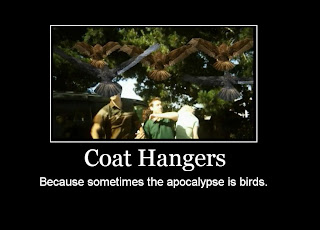 Thats right. Birdemic:Shock and Terror. This movie is a huge piece of shit. I love it like this one girl I knew loved an Icy Mike.  I am a bit tipsy off Spider Bites so I am gonna not even bother to explain this gem and will just link to my review I wrote back after the first time I saw this masterpiece.

Tromeric
Posted by Guts and Grog Reviews at 6:00 PM