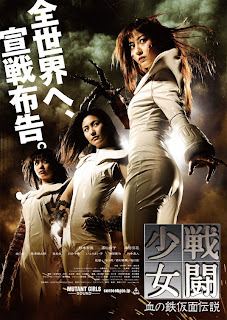 It's like X-Men with hot Asian girls who have chainsaws coming out of their asses and Belial looking faces in their stomachs and way less emo because its a bunch of girls instead of cyclops.
This is the best of the Japanese Mutant movies.  I have enjoyed the majority of these but the choreography in this and the gore are top notch.  The pacing is the other thing, aside from a couple slow moments this just keeps flowing like Carrie White in the shower.  The girls are so sexy and fuck shit up.  One has a techno Freddy glove, one the arms of a squid and one is basically Black Swan.  Their Leader is a metro sexual who turns into a giant beast with huge tits and cleaver hands. Dead Alive anyone?  The battles are all super fucking bad ass and full of gore and fun. There is  a Visitor Q moment and they ride the I have no legs dude from Kids as if hes the magic carpet from Aladdin if powered by The Rocketeer.
I do have one request Japan.  Stop it. You have been pumping out these mutant films at a ridiculous rate and I don't want to see it become like the creepy black haired kids movies you drove into the ground like the guy from that The Bridge movie.  Stop while your ahead this was a high note to end on and I don't ever wanna say "I hate those movies where the hot Japanese babe kill, get naked and shoot shit out their vaginas."  I would forever hate myself and it will be your fault.

Tromeric
Posted by Guts and Grog Reviews at 4:28 PM