My least favorite horror film. That is hard. I am pretty forgiving on a lot of films. Don't get me wrong I hate plenty.  I could go on about all the pointless remakes of foreign films, or the bullshit teeny bopper films from the 90's, or the ridiculous PG-13 kick but I don't care enough.  I personally do not enjoy the Saw films. I think the first one had some amazing moments but overall was not impressed but I don't feel hatred towards it.  Remakes in general are pointless but as we discussed in day seventeen there are exceptions, I did almost go with The Texas Chainsaw remake from 2003 as that film made me pretty angry on every level but when I got to thinking there is one film that made me stand up and scream "FUCK YOU WES CRAVEN." 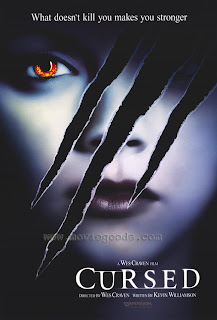 This movie was a mess. Wes Craven has made some of my favorite films ever and even ones that aren't necessarily  "great" that I love, like Shocker or Deadly Friend. Well when he put this out after years of reediting and procrastinating I was appalled. Really? Did that werewolf just flip me off?  I could go on and on with a hate filled rant but I won't because I got a grilled cheese and an episode of the X-Files to indulge in.

Tromeric
Posted by Guts and Grog Reviews at 1:14 AM