I am a sucker for pretty much any horror TV.  I grew up watching amazing cartoons like Count Duckula, The Real Ghostbusters, Toxic Crusaders, Tales from the Cryptkeeper, Groovie Ghoulies, no to mention The Beetlejuice or Attack of the Killer Tomato cartoons.  Speaking of cartoons once a year The Simpsons has brought memorable entrees into the genre with their Treehouse of Horror episodes. Growing up there were many great anthology shows such as Tales from the Crypt, Monsters, or Tales from the Darkside or the kids versions Are you Afraid of the Dark and Goosebumps and of course reruns of The Twilight Zone which was mostly Sci-fi but still had nods to horror all over the place.  Speaking of Mr Rod Serling Night Gallery which was a more straight forward horror show had some great episodes. The Munsters and Adams Family gave me my dose of horror comedy while Freddy himself brought me A TV party, sure it wasn't the best show on, but I didn't care it had Freddy fucking Kruger.  Friday the 13th also stepped into the small screen without Jason inexplicably but still a great fucking show and one of the shows that almost made it for my pick.  The X-Files kept Mulder and Scully looking for the truth from week to week but in between the Flukeman and the crazy inbred family  from home were there to scare the shit out of me.  Swamp Thing got a half hour to be a bad ass andBuffy the Vampire Slayer brought seven years of bad ass monsters mixed in with drama and life. Angel got his own spin off which had some amazing moments and seemed a little more grown up but had a couple story lines that made me want to lock my mythical kids in the trunk and drive into a body of water.  Reaper and Dead like me brought kind of a teen comedy feel to the genre while Dark Shadows brought the daytime soap action. Masters of Horror and Fear Itself was built on a great Idea and had some amazing episodes but a fair share of misses as well.  We are in kind of a resurgence of horror TV.  True Blood and The Vampire Diaries give us our Vamp fix, Supernatural continues to rule and brings everything from monsters to Angels and Demons without Tom Hanks.  The Walking Dead got an amazing start and how can you not love the lovable serial killer Dexter. England brought us Being Human which sounds like a laughable premise but plays out very dark and tension filled while Canada brought one of the best and unique horror shows with Todd and the Book of pure Evil. As you can probably see I love horror TV. It was my childhood and continues to be something I enjoy revisiting and seeking out. With all of these examples there is one show I have to go with. It may not be the best, it didn't last that long but when all is said and done I fucking love it and I continue to watch it to this day. 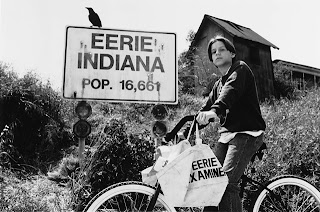 Errie Indiana was basically The X-Files in Twin Peaks for kids.  Joe Dante was a consultant and it had some great guest stars like Tobey McGuire, Danielle Harris, Matt Frewer, and Michael J. Pollard not to mention John Astin and Harry Goaz where regulars. It unfortunately didn't even make it a full season but I will always stand by this show.


Tromeric
Posted by Guts and Grog Reviews at 2:06 AM