Serial Killers.  Since I can remember I have loved reading about serial killers.  I would always go right to the true crime section in the library or used book store when I was a wee little lad.  This of course continued in my love for film.  There have been some great ones such as Henry:Portrait of a serial killer which is almost what I went with or Monster which I loved.  Ed Gein of course has been used many times in everything from Deranged to Ed and his Dead Mother not to mention the two movies just called Ed Gein. Just to note I enjoyed all of these except the newest one where I am suppose to believe that Kane Hodder is Ed Gein. The thing is for the most part I like all of the Serial Killer films.  Even shit like the made for TV BTK movie, totally dug it. Basically as long as Uli Lommel had nothing to do with it I will probably at least enjoy it for what it is. There is one movie that stands up above and beyond all of these those and that of course is what I went with. 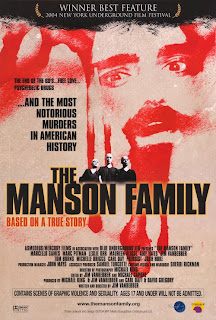 I had been reading about this for years thanks to people like Chas Balun, it was known as Charlies Family and I wanted to see it so bad. There were bootlegs you could find but I just never had any luck.  Eventually I heard Jim Van Bebber was going to film some more footage even though it had been like 15 years or something and re-cut it and put it out. I was stoked. I went and picked it up the day it was released took it home and had my mind blown.  It was so raw and vulgar and beautiful all at the same time.  Since it had been so long the interviews with the family where believable as they had aged quite a bit.  It plays out like a faux documentary with flashbacks and has a No holds barred attitude that would make Hulk Hogan jealous.


Troemric
Posted by Guts and Grog Reviews at 2:05 AM