The 15 Best Films Ever Made According To James Bickert

Another list? Is it for validation, discussion or inspiration? Are these really the best films ever made? No, not by any stretch of the imagination. Everyone knows CITIZEN KANE (1941) is the greatest film ever made, right? While Welles was no slouch, these are the actual films that have inspired me to crawl out of bed every morning – knee-buckling hangover be damned. I present the 15 reasons why this nincompoop attempts to make moving pictures:


15. PRIME CUT (1972)
An all-star cast in a seedy mob vs. mob tale involving drugs and human trafficking. More mainstream digestible than the brilliant Yakuza tales of Kinji Fukasaku, this flick still packs a slap to the face with a bleak tone oozing such human futility you can feel it down in your nugget sack.


14. THE BRIDE OF FRANKENSTEIN (1935)
Now considered a cliché classic but if one revisits this film with the mindset of an audience member from the era, your perception will get hip to the bat-shit craziness on display in this masterpiece.


13. THE BRAIN THAT WOULDN’T DIE (1962)
Actually made in the late 50s, it wasn’t released until 1962, this regional tax-shelter successfully throws everything “not nailed down” into one giant psycho-sexual boiling pot of depravity. There are so many whacked-out ideas coming together - Joseph Green unknowingly created the dogma from which I live.


12. FLASH GORDON (1980)
A psychedelic overload that caused my pubescent bore worm to feel funny every time Ming’s daughter was on screen.


11. YOJIMBO (1961)
The first anti-hero I saw on screen and the best. When you have Kurosawa, there is no need for a Spaghetti Western on this list and there are over thirty great pasta dishes.


10. ESCAPE FROM NEW YORK (1981)
The apex of the anti-hero. If you don’t want to be S.D. Bob "Snake" Plissken, than you’re probably late for your pilates class and juice cleanse.


9. NIGHT OF THE LIVING DEAD (1968)
The film that taught us gut-munching horror geeks, at an early age, cinema can be more than just entertainment. Even at its most outrageous window-dressing extremes, it can be art with beautiful underlying themes.


8. NIGHTS OF CABIRIA (1957)
While the sheer genius of Fellini’s LA DOLCE VITA (1960), 8 ½ (1963) and the critically panned THE CITY OF WOMEN (1980) have been a major influence on my comprehension of essential film elements, this powerful performance by Giulietta Masina as prostitute Maria 'Cabiria' Ceccarelli continues to inspire me not as a filmmaker but as a human being. It may sound odd that the story of a dreamer would have such an impact but her ability to keep brushing-off life’s shit blizzard, whether foolish or not, and continuing to live is truly magical and continues to evoke an empathetic emotional response. A great fix to rejuvenate your suppressed passions or to brush-off opinions masquerading as criticism from uneducated misery trolls.


6. RIFIFI (1955)
Fuck everything you know about caper movies. They can suck it. This is the prototype heist film and the baddass mother fucker from which all shall be judged.


5. SPIDER BABY (1968)
A dysfunctional nuclear family jumps the shark into an Agatha Christie plot in this surreal and hilarious flick that inspired THE TEXAS CHAINSAW MASSACRE (1974) and many others.


4. FASTER PUSSYCAT KILL! KILL! (1965)
How do you make a great exploitation film with no nudity? Tight clothes, innuendo, nutty set-ups, crazy cuts and inspirational camera angles – this is the blueprint.


3. FEMALE CONVICT SCORPION: JAILHOUSE 41 (1972)
A gloriously car crash of pop art and exploitation that builds on the equally rewarding FEMALE PRISONER #701: SCORPION (1972). We should all kneel at the Fuji celluloid alter and praise the cinema gods that Toei didn’t handcuff Shunya Itô’s vision.  There are many treasures of French New Wave influenced Japanese cinema from this era and this manga interpretation is the crown jewel.


2. SANTA SANGRE (1989)
No other film, sorry Luis Bunuel, has successfully merged exploitation, horror and surrealism than Alejandro Jodorowsky’s SANTA SANGRE. With the collaboration of Claudio Argento’s production sense, the mad genius crafted one of the greatest achievements in motion picture history.


1. THE CHEERLEADERS (1973)
You can have your STAR WARS, STAR TREK, MIDDLE-EARTH, DC & MARVEL universe, this is my perfect fantasy world. I want to live here and love you in the moment. 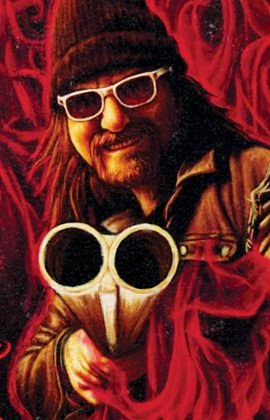 James Bickert was raised by an empty can of Pabst Blue Ribbon, containing alcoholic mosquitos, underneath an abandoned drive-in screen along the muggy Savannah River. He is currently in production on the film FRANKENSTEIN CREATED BIKERS - a sequel to his international acclaimed disaster-piece DEAR GOD NO! (2011). James is also a contributor to Fangoria’s Gorezone and Weng’s Chop. He has an understanding wife, smart kid and two large dogs that do not appreciate what he does.
Posted by Guts and Grog Reviews at 2:18 PM