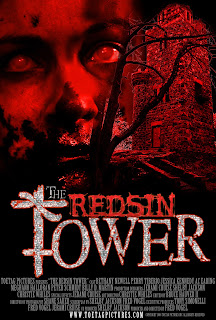 Toe Tag has made a name for themselves over the last decade or so.  Their August Underground trilogy are among the sickest of the sick. I mean that in the nicest way possible. Growing up I would always seek out anything I thought would gross me out. The problem was most of the time even movies I had heard were the sickest things this side of Patrick Swayze's last week alive were tame and kind of boring. Jump ahead to hearing about these infamous films. I saw Mordum first. My mind was blown. In fact I am pretty sure somehow I shit and pissed all over my dead grandmas body while raping her decomposing foot. I had to see the first one(at this time Penance was still not out). I was so impressed with the effects that I had to show everyone. While not being the most plot driven films I have ever seen the gore was enough to warrant multiple viewings. I then saw they did the effects on Murder Set Pieces and was insanely impressed with that. I had high hopes. It was nice to see the effects inside of a story I actually enjoyed.

This brings us to The Redsin Tower. A Toe Tag film with plot and acting and story. I was ecstatic. It starts out as a breakup story, turns into a revenge story and somehow mixes in some supernatural possession for good measure. It is very reminiscent of 80/90's films like Night of the Demons or The Convent both of which I am huge fans of.
It is a very different kind of film than most are used to. Everyone involved seems to care a lot about the film and it shines through. While no one in here strikes me as actors they all do an insanely believable and great job. The story flows like a Anemic on her period and as you can guess the effects are mind blowing. Buckets of blood, heads being chopped up, babies being eaten(Brother Lynch would be proud) one dude read Where the red fern grows one to many times and puts his hatchet to use more than Victor Crowley.
4/5
Posted by Guts and Grog Reviews at 2:08 PM