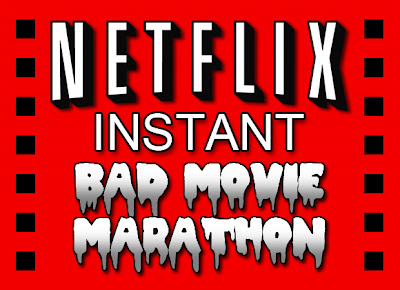 (banner courtesy of Morbidementia.com)
NETFLIX INSTANT BAD MOVIE MARATHON!
(Part 3: Full-On Full-Moon Fools-Gold!)
Saturday August 13th, 2011 starting at 8:30e/7:30c/6:30m/5:30p
(Saturday the 13th is a Full Moon, so we will pay our respects by hosting WEREWOLF NIGHT!)
What is the Netflix Instant Bad Movie Marathon?
About two months ago we had our first ever Bad Movie Night on Twitter. We chose 3 movies available on Netflix Instant that we deemed bad enough to be awesome. Then we watched them and ripped on them MST3K style via Twitter. Also, we drank pretty heavily and misspelled words constantly. But we had so much fun that we did it AGAIN! We've watched baboons driving tanks, hunky men throwing things into outer space, but this time we pay tribute to the moon: Werewolf Night.
What can you do?
JOIN US! Get on Twitter, Fire up your Netflix Instant machines (if you’re watching on your computer you’ll have to download a plugin FYI), find a comfortable spot and rip these movies to shreds with us! Why? BECAUSE THEY DESERVE IT! Just be sure to post your Twitter handles in the comments section or seek us out on Twitter and let us know you’re in on the fun. (On Twitter you can add people to a list, that way you don’t have to follow on your regular newsfeed, you can just pick it up on the list. Also, we will be using the hashtag #badnetflix. It worked really well last time and anyone that sees our posts will be able to pull up that hashtag and see what everyone else is doing as well!
But let's say you are a Twitter Hater. You find the thought of Twitter repulsive. Then PLEASE do this through any other means you think you can reach people worldwide! Have an active blog, update via facebook, throw a party on xbox, Skype it! Whatever you want to do, just whatever you do PLEASE let us know so we can follow along! And also keep locked onto our Twitter feeds to keep up to the minute with the world’s greatest bad movie commentary! (MST3K aside of course.)
By all means, make it your own. Maybe doodle pictures while you’re watching it, record yourself hating yourself for watching these movies, whatever you want to do!
Where can you find us?
One of NIBMM founders, Vincent, was nice enough to keep a neat list of past participants on his Twitter account. Please CLICK HERE to see the current list of the Bad Netflix Crew and make sure to follow them.
What are we watching? 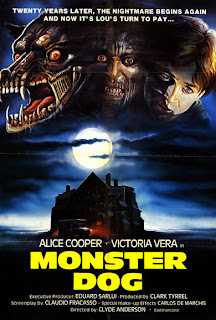 Monster Dog
1984 - 84 min - Not Rated
Directed by: Claudio Fragrasso (The genius behind Troll 2!)
IMDb Rating: 4.0/10
Synopsis: Musician Vincent Raven (rocker Alice Cooper) ends up in trouble when, girlfriend (Victoria Vera) in tow, he heads to his boyhood home to film a video with his band. Soon after they arrive, a string of horrific deaths occur, seemingly caused by a pack of wild dogs. Two decades earlier, an angry mob killed Vincent's dad, who was thought to be a werewolf; naturally, the townsfolk presume like father, like son. Will Vincent suffer his father's fate? 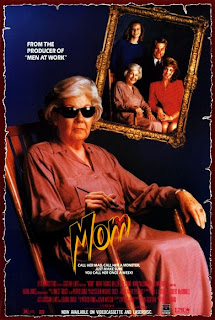 Mom
1991 - 95 min - Rated R
Directed by: Patrick Rand (This EDITOR'S only Directorial credit!)
IMDb Rating: 4.5/10
Synopsis: Proving that flesh-eating monsters don't practice age discrimination, this black comedy tells the tale of elderly Emily Dwyer (Jeanne Bates), who takes a suspicious lodger into her Los Angeles home. After being bitten by him, she develops a taste for her son, Clay (Mark Thomas Miller). Desperate to keep his mother from committing homicide, Clay has her incarcerated, but after she escapes he must take matters into his own hands. 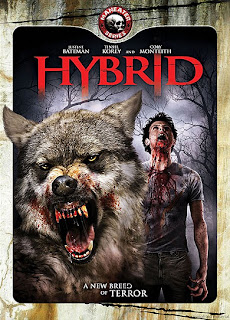 Hybrid
2007 - 90 min - Not Rated
Directed by: Yelena Lanskaya (she looks like a Hallmark director)
IMDb Rating: 3.2/10 (This'll probably be continuing the Curse of the Third Movie)
Synopsis: Using a risky transplant operation, Dr. Hewlitt (Justine Bateman) restores the vision of newly blinded Aaron (Cory Monteith) by replacing his eyes with those of an injured wolf's. Now, Aaron can see in the dark, and his dangerous wolflike behavior only increases with time. Part wolf as well, museum curator Lydia (Tinsel Korey) decides to help Aaron, but Dr. Hewlitt's colleagues are convinced the man-wolf is dangerous and resolve to hunt him down.

Hybrid - 90 minutes - begin 12:00(am)e/11:00c/10:00m/9:00p
Last Words
Thank you again to ALL that participated last month and got this thing off the ground. This is truly a fun time to spend on the internet. In all honesty, it's all about hanging out with cool people that happen to live hundreds of miles away. I'm so happy I get to do this and I'm glad other people enjoy it too. Hopefully we'll rope in a few others into participating again this Saturday. I'm sure we can. I know we can. See you all Saturday! I look forward to fishing for gold on Netflix Instant with all of you!
Posted by Guts and Grog Reviews at 4:51 PM