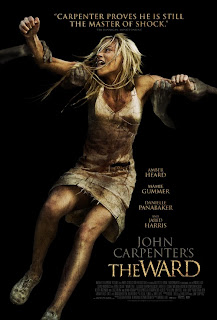 John Carpenter is one of my favorite filmmakers. In his long career he has made some amazing contributions to the horror and action genres. Halloween still is one of my all time favorite films and The Thing, Escape from New York and Big Trouble in Little China are not far behind. He has also brought us plenty of other great films such as The Fog, Christine, In the Mouth of Madness and  so many more. Even his less than perfect films ala Vampires, Ghost of Mars are entertaining and keep me watching from time to time.  A few years back he made episodes for both seasons of Masters of Horror. The first Cigarette Burns was one of the best of the series and made me have high hopes once he returned to film he would still have it. His second entry Pro Life while not as unique as Cigarette Burns is at least fun, had Ron Pearlman and I love anything with abortion in it. We now arrive at his return to film with Ward. Was it worth the wait?
The Ward is so predictable, cliche, boring and has an ending that even M. Night would shake his head in disapproval at.  I wanted to like this. I assumed it would be no masterpiece but I at least thought it would be a fun ride. It's not. Moments of it work. I love Amber Heard and a lot of the supporting cast is great but none of them shine. This movie is so average. I think that's what bothers me. Anyone could of directed this. The story is basic, a few of the shots are cool but overall nothing even happens exciting there. The music is forgettable. Yeah in a Carpenter Film. I have nothing else to say. Its a sad day when I have to say anything about John Carpenter. I am going to go in the corner, curl into a ball and cry.

Tromeric
Posted by Guts and Grog Reviews at 7:51 PM