Nun of That- Richard Griffin 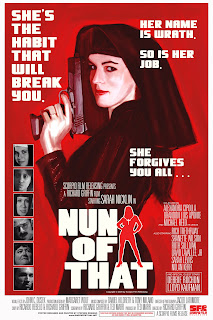 Remember those calenders Nuns having fun? Well this is kinda like that only their fun includes sex, murder, taking down the mob, dancing, striping, and bar fights. Nun of that is a modern day low budget Nunsploitation film that while not being perfect manages to be a pretty fun ride, as I assume a nun would be.
Nun of That follows Sister Marry Wrath as she is brought into a secret sect of nuns and priests that dish out the lords love the way they know best. With guns.  They can't stand around and let all this scum taint the earth, they must fuck it to death.
The film sits at ninety minutes which I admit is a bit longer than it should be but overall it played alright. The list just goes on with memorable moments. Jesus singing a song that I'm pretty sure Depeche Mode wrote to a bunch of drunk nuns and a naked angel is probably the highlight. A Road House homage with Nuns drinking, fighting, throwing beer bottles at the blind nun singing on stage. Yeah that happened. A couple of cameos, one of which is Lloyd Kaufman playing the part he was born for and so many pretty amazing one liners that you would think Arnold Schwarzenegger wrote the script.
If you take this for what it is, have some drinks and have some friends over it is a pretty fun ride.

I bought this movie approximately 30 seconds after I first watched the trailer. I haven't regretted it once.

It was awesome. I just wish the whole movie was done in the new wave song and dance. That would of been epic.