Sequels have always been a part of film, for some reason horror seems to take advantage of them more than any genre. Well maybe aside from porn. Sequels are made for many different reasons. I would guess cashing in would be right at the top of the list. It could be argued that lack of creativity or laziness could be factors as well but this is not about that. This is a list of hand picked sequels that I love. I am expecting some backlash for this list. Some of my favorite sequels are some of the most hated of the genre. Mr. Jagermeister and I will attempt to explain why we picked these. This list is in no way was put together using quality of film as the only reason. It is my thoughts on what I love to watch and in most cases grew up watching.  Some of these are bat shit crazy ideas that never should of made it past the brainstorming stage. I tried to keep it in direct sequel category which is why you will not see Dawn or Day of the Dead. I did not use films like Argento's three mothers trilogy or Chan-wook Park's Vengeance trilogy either.  I wanted to include Project ALF but felt like made for TV movie that followed up a sitcom might be pushing it. I also tried to keep it horror which is why Deathstalker 2 is not on here even though it is one of the best sequels this side of The Godfather.  I considered putting Sometimes they come back again and Sometimes they come back for more at the top just based off the titles. Those titles are right up there with Electric Boogaloo and The Search for Curly's Gold, unfortunately I couldn't in good conscience even put them on the list as they are basically dog shit. Well enough of that. Let the arguing begin as we enter Tromeric's twisted land of sequels.

Before he made Shark Night 3D or Snakes on a Plane David R. Ellis took Final Destination to places that it was kind of lacking in the first. I am talking about the deaths that Like Dio made you stand up and shout this time. The Final Destination movies are pretty much the same every time and overall pretty god damn basic. What matters are the deaths and this is the one to go to. I will say that part 5 did a pretty god job in this category and almost made the list. The deaths were fun and the end made me feel like Lethal Weapon 4. I hope they are smart enough to end it there as it left the overall mediocre series on a super positive note.

The King of King shows us why Norman likes dressing in drag. Made for TV and it show's but always good for a watch. Surprisingly effective prequel. 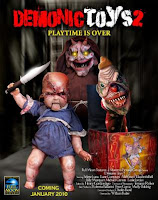 
Made eighteen years after the original and still maintains the feel. Baby Oopsie Daisy still shits the pants. What else do you need?

Takes the same approach as Evil Dead 2. Essentially the same film remade in a more humorous tone.  Some pretty hilarious moments in this.

Like most of the films on this list while not being as good as the first I enjoy watching this one more. I have more nostalgia for this than a alter boy does for priest wang. I enjoy all three but The Raft is the highlight.

Doll Sex and John Ritter. Have a super amazing memory of watching this in a trailer while eating a frozen pizza. It has stuck with me for years.

It's no surprise that a few Friday sequels would end up here as there are about a butt load of them.  Overall I think that Friday has the best percentage of sequels good to bad but for now I will stick to this one.  The kills are fun, Alice Cooper wrote a song for it and a cop gets folded in half.

While not being a perfect film Halloween two picks up right where one left off which just makes it a fun follow up.

I feel guilty having this so low on the list as I love the first one and the gore and characters in this are fanfuckingtastic. It does however suffer from the curse of the long running time. If he had cut down the time even twenty five minutes I think it would hold up a lot better. I still love it, don't get me wrong.

OK, I know 85% of this is flashbacks from part one but it has one thing that almost put it in the top ten until I decided to show some restrain. Garbage Day. Yeah garbage day is one of the greatest moments in film period.

Well there are the first ten of the greatest sequels. I will be posting the rest over the next few days. Let me know what you think and keep your eye out for the rest.

Posted by Guts and Grog Reviews at 8:21 PM