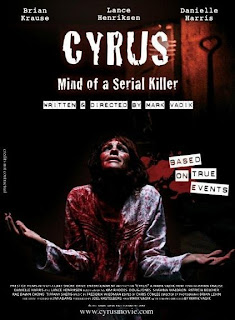 Serial Killer movies are a dime a dozen. Some like Henry:Portrait of a Serial Killer and The Manson Family use the subject matter and make a pretty god damn compelling and beautiful movie. On the other hand you have bullshit like all the Kane Hodder serial killer films and of course one of the worst filmmakers of all time Uli Lomel. Cyrus is somewhere between.
Cyrus is told through many flashbacks that Lance Henriksen is reporting to Danielle Harris. That dude from Sleepwalkers plays Cyrus for most of the film and Tiffany Sheppis gets naked and plays his evil whore of a mom. Doug Jones takes the eyes out of his hands to talk some bullshit about serial killers. The thing is most of these people along with pretty much everyone else do a pretty fantastic fucking job. How can you not love Mr Frank Black himself? Danielle Harris seems like she cares the least out of all these. I generally love her, especially in The Last Boy Scout but I don't know how much I buy her as go getter reporter. The one who deserves most of the credit is enemy of the cats Brian Krause. He plays Cyrus so cold and calculated without overdoing it as I would imagine would be an easy thing to do with the character.  The effects are used well overall outside of a head explosion that could of been amazing but was just to CGI heavy. The biggest flaw with Cyrus are the inter cut interviews. These are so out of place and boring. They just seem like filler to reach the ninety minute run time which is one thing I will never understand. why is a 75 minute movie that works better than a ninety minute movie so full of shit.  If they would of just kept Cyrus and maybe a little bit of Lance telling it I think it would of been a much more powerful film. Every time I was getting sucked into the story some random ass person would pop up and spout off some facts they learned from Frontline.
If you enjoy serial killer films and have ninety minutes you don't mind wasting give this a shot, otherwise look up Mr. Jim Van Bebber or John McNaughton.


Tromeric
Posted by Guts and Grog Reviews at 5:12 PM