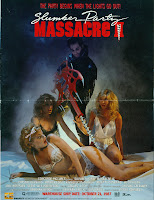 Is that a drill on that guitar? Did they try and make a David Lynch film out of a Slumber Party Massacre movie? Love it.

I know many people will not understand how this is so low on the list. I enjoy the shit out of this but it just doesn't compare to the first two at all for me. It will always be an integral part of my childhood but I love puppets more.

Very few series remind me of my childhood more than Puppet Master. I love all of them. Well aside from vs Demonic Toys but I don't count that, that's like claiming a rape as loosing your virginity. Puppet Master two is great for a couple of reasons. The first is it's basically Ghost Hunters vs Puppet Master and second is the introduction of Torch. Torch is a bad ass and he will make you look like Travis Barker.


The newest Gingerdead Man film but hopefully not the last. This pissed off cookie takes on a time travel, a roller boogie and more references than I make, well maybe not that bad.

Waxwork two is basically Waxwork with Bruce Campbell and an amazing rap video over the credits.

Amazing soundtrack, great cast and amazing kills. The Sleepaway Camp sequels took a great movie and changed the whole feel and it worked.

Jeff Burr, king of the sequels takes a stab at one of my favorite characters. While not nearly as powerful as the original this is a fun ride kind of like your mom.   Oh, did  I mention Punkey Brewster and Linnea Quigley?

Turns out James Cameron was even an asshole back then. His movies were better and had less blue people in  them. Did mention flying fish?

The final installment of the Child's Play franchise is just a fun fucking film. Some may even call it a blast...of semen to your face. Sure it doesn't take itself serious at all, but I am OK with that. Kills are so fun and John Waters makes everything better.


In our generation we have been blessed with some great directors that have changed cinema. David Lynch, Stanley Kubrick, Alfred Hitchcock  and the genius behind such classics as Chopping Mall, Deathstalker II and this gem. Swamp thing is such a great character. Craven pulled off a great film with the first one and I grew up on the TV show and the cartoon. Wynorski just takes it to new levels of awesome. Heather Locklear is not bad eye candy either.


Well there is part two. Will I step it up for part three or loose steam and just kinda follow the same formula, or will I just say fuck it and make a list about something completely different. Be on the lookout.