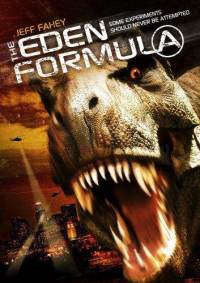 John Carl Buechler has made some pretty fantastic movies. Ghoulies 3: Ghoulies go to College is well dare I say a masterpiece. Miners Massacre is so bad ass he could give Harry Warden a run for his money and we can never forget all the amazing effects work this man has done. Friday the 13: The New Blood is one of my least favorite of the series but the Jason effects in that are right at the top of the list. Hatchet gave him a chance to shine again and he got to drink his own pee. Awesome.
The Eden Formula I am sad to say is not at the top of the list of awesome. You had the elements there. Dinosaur, Tony Todd, John Carl Buechler, and the Lawnmower Man himself Jeff Fahey. The dinosaur looked like it was from Sifl and Olly. That of course is not a bad thing. I enjoyed the dinosaur. Every time he picked someone up and ate their head off, cinematic gold. There were some good effects and some awesome moments but it suffered from the way to fucking long for its own good syndrome. If it had been about half the length and they cut out all the unnecessary heist crap out it could of went right there on the list with Miners Massacre but by about an hour I was pretty god damn bored.
I have seen worse, if you have the time and are pretty intoxicated there is some enjoyment to be found you just will have to suffer through a bullshit heist movie that happens to have a bad ass puppet dino that eats bitches.

Posted by Guts and Grog Reviews at 1:37 PM

Some circles regard this movie as Carnosaur 4 because it recycles footage from Carnosaur.

Very cool concept and reviews
The work is very versatile, with so many concentrations intermingling
Ninja Gear

Thank you but that is mostly just the grog at work on my liver.