So I have always wanted to do a best of for every year, I have done them here and there but thanks to http://www.365horrormovie.com/  I have been inspired, I spent about 15 hours straight narrowing down and figuring out what came out in what year.  I will be posting them for the next few weeks until I get to 1970, I tried to go all the way back to 1960 but I will admit I am not full of knowledge when it comes to a lot of the 60's horror, I came up with a few for each year but not enough to make it worth it. I of course love the classics like Psycho, Night of the Living Dead, Blood Feast, Blood and Black Lace, 2000 Maniacs, The birds, 13 Ghosts and a few here and there but anyways, I also found the most of the 90's were not easy for me, probably my least favorite decade for horror over all, a couple good years and   some amazing movies but overall kinda mungtastic.  Most of these lists will be top 10 but a few years just had way to much good stuff so I went for anywhere from 15 to 25. Well after all my blah blah here is the first which was the year that the manliest golden girl bought the farm, 1000s of kids rejoiced for their safety while at a ranch and David Carradene blew his last load while reenacting An Occurrence at Owl Creek Bridge.  Enjoy 2009. 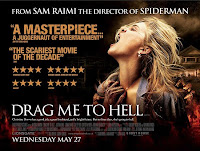 10. Drag me to hell- Sam Raimi
He is back, at least as close as we will ever get. Sam Raimi shows us a bloody good time with this 3 stooges meets thinner party.

9. Feast 3: The Happy Finish- John Gulager
The last in the feast trilogy. I don't care what anyone says all 3 feast are fun as fuck. Fun fuck even. One of the best endings ever.

A true 80's slasher, kind of shitty but the gore is unfuckingbelievable.

One of the greatest openings ever, and quite possibly the best cameo since the Sponge Bob movie.

I guess you do go ass to mouth sometimes.


This preist knows how to party

A nice throw back to the HG Lewis days of gore films, great cast and Sasha Grey.

2. House of the Devil- Ti West


This movie will rape your face off.

Tromeric
Posted by Guts and Grog Reviews at 3:55 PM