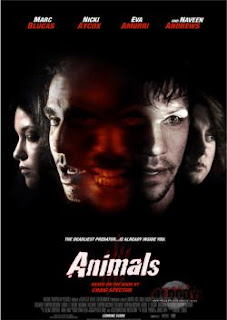 What a piece of shit. LOVED IT.  This movie should of been made in the 90s for skinamax.  So much soft core sex.  I felt as if I was watching Embrace the vampire as if directed by one of the Full Moon dudes, oh wait this dude wrote Puppet Master 4 and 5. The writer of the novel this is based off of is John Skipp who was one of the original Splatterpunk authors back in the day and also wrote the script for Nightmare on Elm St 5.  Which sucked, but we wont hold that against him as he is kind of a bad ass.  This movie is kind of a slow starter but you get tons of skinamax sex to hold you over.  The dialogue is laughable at times but is delivered in a surprisingly sincere manner. Not to shocking when you get a team up from three of the best TV shows ever produced outside of Twin Peaks.  You have Nicki Aycox from Supernatural, Naveen Andrews from Lost(doing one of the worst British accents ever) and Marc Blucas from Buffy who was probably Buffy's most irritating fuck buddy the entire series but regardless not a bad chap.  Anyways this movie is pretty shitty overall but for some reason I loved it. Probably cause I am a fucked up individual who has sat through Blood Freak more times than I care to admit.  Like I said earlier the dialogue is atrocious and the writing is quite convoluted but somehow it works.  As shitty as it is you can tell that these people tried to make a great movie based off a great book, it just didn't end up that way but the sincerity is there.  I will say a lot of the practical effects are insanely bad ass and will have you wanting to punch a puppy in its cut off ball sack out of excitement. On the other hand the CGI in this is fucking godawful. It is however so fucking bad that I kind of enjoyed it. Its kind of reminiscent of Primal Rage for the Genesis.  These animals look like Kangaroo Jack if he had been animated on an Apple 2E.  It is utter shit, almost on par with the gif birds from Birdemic but still somehow a step up from that(not 3D though). Long story short great ideas, Nicki Aycox all kinds of naked, tons of fucking heart and a fun ride. Kind of like a shroom trip that kind of got a little weird but in the end it was kind of a fun ride. If you enjoy shit shove your anal beads up this movies ass and lay below it and take it all in and rub that shit all over your nips.  Sometimes it feels good to be a dirty dirty whore.


Tromeric
Posted by Guts and Grog Reviews at 3:32 AM