Well its time for 2008, the year that Boss Hogg left the white house and we traded him in for a Huxtable. They had to update the Joker action figure with pill popping action and we lost both Vampira and Major Briggs. Aside from all of that it was a surprisingly good year for film, specifically horror films. So now I take you to the top 20 of 2008.

These kids is pissed, can't beleive this is the same dude that made that peice of shit The Killing Gene. Wow that movie made me want to suffocate myself with infant innards.

Kind of the opposite of the children, this mom is pissed. She doesn't beleive that anything is to late for late term abortion. Smart mom.

The director of the original returns after passing off parts 2 and 3, people like to complain a lot. This movie was hated because the characters were irritating, and it was just dumb kids getting killed off with a crazy shock ending. So my question is have any of you mother fuckers seen the first 3?

Based off the Imperium Comic of the same name, I had been a fan of the comic since I read it the first time. Super fun and kinda crazy.  Rockabilly, white trash, sexy lady that hangs out with zombies and shit. I'm sold.


A nice throwback to the 80's gore fest. Over the top(no arm wrestling though) gore and nudity, you basically hate everyone so its fun to watch them get their balls ripped off in a bowling alley. 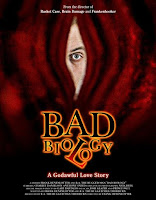 Frank returns after a long hiatus and somewhere along the way he met up with a buch of indy hip hop kids. R.A. The Rugged Man co wrote it, Vinnie Paz and Reef the Lost Cause have Cameos and there is a Atmosphere song in it. Henenlotter is not the first guy I would of guessed would of teamed up with these guys. I love that he did though, while not a perfect film i can't help but love all the crazy body mutation shit he pulls off. If you are a fan of the sick and twisted check this shit, its better than two bitches in a bitch boat.

Coffin Joe is back making bitches eat their own asses. This guy knows how to party.

This movie almost made my friend loose his chicken adobo allover my couch, super fun and insane gore. I love Japan.

Another one from the east. I love Japan so much, get an umbrella and enjoy this gore fest.

Wow, this movie sucks so good I can't even explain it, Gif birds cause some ruckus and there is some romance.

I should hate this, but I don't. Super entertaining and Paris Hilton is so hot with her sliced up face. Giles is a bad ass and Chop Top is fucking amazing.

So good, a Kitamura and Barker, Maybe best team up since Hall and Oats.


From the Director of Jason X and Skinwalkers. Don't let that influence you. This movie is so bad ass. I saw this at Crypticon like 2 years ago and was so fucking stoked, and thank dead jesus it is finally coming out thanks to Fango's new DVD label. 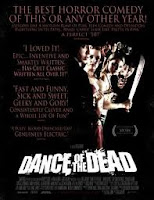 7. Dance of the Dead- Gregg Bishop

Sixteen Candles meets Return of the living Dead. Zombie jump run out of the graves and there is a Andrew W. K. Song. That adds up to badassery. 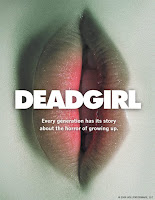 
So long between Boxing Helena and this and it shows, such a good what the eff movie.  Weird cast pulls it off exceptionally well. 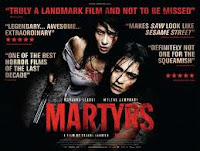 The French know how to kick your ass when it comes to film. If only they didn't feed their children wine and cigarettes all the time. Oh well. The best skinning since Hellraiser.

2. Let the right one in- Tomas Alfredson

Fucking beautiful and amazing and subtly brutal. If you haven't seen this take the butt plug out and see it before Matt Reeves destroys it.

Hands down one of the best horror films in years. Dylan Baker takes a brake from teaching his son how to play with his gooch to fuck some shit up. This is the movie you will watch every Halloween and plenty of times in between.