I have a guest review for you today, a different(and very wrong) look at the Martyrs from Jeremy Gaulkenstein. 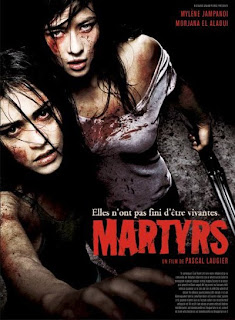 I had been told by many people whose opinions I generally agree with, that Martyrs was a mind blowing film. Another slam dunk for the French horror renaissance. Unfortunately, despite its promise early in the film, Martyrs eventually disappoints. The French have, or have thought they have, had a virtual monopoly on cultural daring, progress and artistic innovation for some time. So the slew of new horror films emerging from the birthplace of the avant-garde are often regarded as inherently brilliant without the scrutiny they are due. Such is the case with Martyrs.

(Here's a brief overview of the plot. Watch out for spoilers)
Admittedly, I was intrigued by all but the last 30 minutes of the film. The story begins with the discovery of a hideously abused little girl who escapes from an abandoned warehouse where she was systematically tortured for an extended period. No one is apprehended for the crime and little Lucie is sent to an orphan's asylum where she she forms an extremely deep bond with another little girl named Anna. Anna eventually discovers that Lucie's suffering has continued. This time by PTSD and a bizarre series of inexplicable attacks from a strange and vicious creature.
15 years later Lucie finds the people she believes were responsible for her imprisonment and torture. She shoots the entire family with a shotgun and calls Anna with the news. Anna heads out to the remote house to help Lucie get out. Anna's skepticism becomes more and more apparent as she discovers the mother of the family still alive and tries to help her escape. Lucie shoots her and suffers another attack from the creature but realizes that the creature is a manifestation of her guilt over escaping as a girl and leaving her tortured companion behind. Lucie kills herself. Anna, believing the entire incident to be a terrible mistake tries to clean up the blood and bits Lucie had painted the walls with. Just when she's about to call the Molly Maids she finds a secret passage into a basement. Ala Real Killers, the basement is an elaborate torture chamber containing a terribly disfigured woman when a steel chastity belt and helmet that has been nailed into her skull. Suddenly Lucie doesn't seem so crazy and Anna tries to help the woman escape. Suddenly a group of strangers enters the house shoots the woman and this is where it all goes wrong, big time.

I'll pause for a moment to acknowledge the positive aspects of the film thus far. Paramount, are the practical effects and makeup. This film is relentlessly violent and in many respects artfully so. You see the most impressive fully skinned body since Hellraiser for instance. The dynamic between Lucie and Anna, though squandered later in the film, was extremely mysterious and powerful. Had the focus remained on their story and its end I'm sure I would have liked the film a lot more. But as in High Tension, the imposition of a sophomoric twist disrupts the narrative and conspires to undermine the entire plot.

That irritating plot twist begins with the strangers entering the house and killing the tortured woman Anna is trying to save. Anna is captured and bound and dragged into her own holding cell. An old woman, know only as Mademoiselle, explains that she is the leader of bourgeoisie cabal devoted to finding a person who can survive extreme torture and somehow intimate the experience of transcendence to her torturers. This is where the record scratches. First, the assumption that anyone undergoing the kinds of extreme torture that would eventually be laid out for Anna would achieve anything but complete disassociation and hallucination, if not death, is asinine. The second flaw is the absent necessity of such an experiment. There are well documented cases from around the world, of everyone from Albert Fish to mystics and shamans devoted to the power of extreme pain to produce an outer body or extra-sensory experience. One could produce a similar experience with someone in a completely consensual environment. But again, any result would be illusory and completely manufactured by the human brain under extreme direst. One would assume a group of sophisticates with more money than sense might check out some things on wikipedia before they started torturing children.
This may all seem like movie nerd nitpicking but it is important to note how contrived and absurd the events presented in the last quarter of this film are. What others may see as profound or innovative, under scrutiny are revealed to be examples of the the same pedestrian modes posited in the likes of the Hostel train wrecks. The film demands the utmost realism in its violence, one must expect such realism in the story. Especially after being ripped out of a thoughtful revenge film and plunged into an existential (from the French? No.) diatribe from a group of rich crape eating fucks. I won't totally expose the end of the film but it is needlessly ambiguous and abrupt considering how far and thin they stretch the rest of it. Insinuating on one hand that there is some kind of afterlife and on the other that there is nothing (I could have told them that). My parting bitch is the whole defining “martyr” thing they do at the end and I believe in one of the conversations with Mademoiselle as she explains the profundity of organized torture. This is merely etymological pining. Language is driven by the dominant vernacular not by each word's family tree. Martyr does mean “witness” in Greek. But reducing words, especially as disconnected from the modern context as to return to the Greek, to their origins does not make them mean something else. Martyr means witness as much as fagot means a pile of twigs. A martyr was a Christian sacked lunch for a group of Roman lions... unless you're in Greece. Look it up.
All in all, Martyrs as anything but torture porn is a loss. The American remake should be a hit.

Jeremy Gaulkenstein
Posted by Guts and Grog Reviews at 3:54 PM

Great, great, great review and this is coming from a Martyrs fan. Ill. More from Jeremy.

There is more coming from him, but you don't love my reviews anymore Keith? Is it my whole lack of the English Language and spelling and grammar? I Try harder just for you sir. I do agree this was a great review(he is still wrong though) Martyrs for life.

I respectfully disagree. The idea that consensual torture would illicit the same energies and internal conflicts that a forced situation would makes no sense. They also were aware that people have reached the "other side" through pain, thats why the focus of their experiments was to finally find out what those martyrs saw right before death.