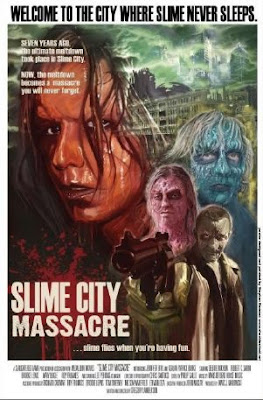 Slime city Massacre is the follow up to the 1988 classic slime/gore film from Greg Lamberson. It is two stories interwoven to tell of the past and future.  In the fifties we see a wackadoo cult that loves flesh and yogurt and shine.  We then see some squatters in the future that find the yogurt/shine and indulge and become covered in Nickelodeon Gak.  This makes them horny so they fuck and slime each other all up and go kill some vagrants. Roy Frumkeys(the man that brought us another classic slime movie from the 80's Street Trash) shows up as Donald Trump and wants Slime City so he sends in a clean up crew to take out the bums, one of which looks like Jim Jarmusch had sex with a crite hunter. Chaos ensues and everyone gets all slimed up.
Slime City Massacre feels more like a post apocalyptic thriller from the 80's than its predecessor which was more of a straight up gore/splatter fest. There is plenty of great gags in in don't get me wrong it just seems to be on a completely different playing field then the original.
Slime City Massacres biggest problem is that its to ambitious. I feel bad saying that but the budgetary restraints are obvious and it can kind of take you out of the story. On the other hand in their defense what they did with such a modest budget should be applauded. The appliances and practical special effects are fun and very reminiscent of the eighties, I love the slime and the colors and there is a great beheading and Debbie Rochon turns into a bathtub of goo that is just a face and its fucking gross.  When she emerges from the tub  with a vagina that stretches taint to tits you can't help but rejoice.
This film does fall into problems with some of the CGI they use.  I like many prefer practical over CG but there are times it has worked for me.  This movie is full of times where it didn't though. A tongue scene in particular  made me cringe and not in a good way.  They added some extra splatter via computer and while not perfect I could look the other way on that.  As I said earlier on problem is it is to ambitious.  There is a lot of social commentary here but it feels pushed at points and gets a little convoluted.  My biggest complaint is some of the sound design.  The screaming is god awful. They reuse the scream that you have heard a thousand times that is on every sound effect CD.  You can hear the sound come and go at points and that kind of takes you out of the story. One place the sound does work is the melting and slicing. It adds a lot to what you are seeing on screen.
Slime City Massacre is far from a masterpiece.  It has its flaws, however it almost wears them as a badge of honer. The sets are amazing and you believe you are in this total shit infested ghost city(probably because you are, I believe they filmed in Buffalo).  I,  like this chef I know like to watch people melt, if there's slime I have time is the motto I just made up now.  If you are a fan of the original or like low budget slimy, gooey, gory fun seek this out. It won't blow your mind but it may melt it a bit.  Or at least that bottle you drink while watching it will.

Tromeric
Posted by Guts and Grog Reviews at 12:16 PM

I had some reservations over this movie...and the original. I've seen neither. I think I need too.

Mostly haven't seen them because me and my friends IDOLIZE Street Trash and they tell me that Slime City just doesn't work the same. So I keep passing it up.

But slimey people is a good thing so I need to do this I think. And I need so see megavagina. That sounds AWESOME.

I love the original. This like I said is different. I enjoyed it though. Not perfect by any means but Ill take it as a bastard brother to the original.