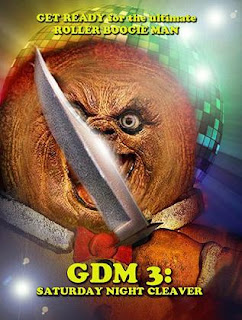 I was lucky enough to see Evil Bong 3 in the theater in 3D and Sniff-O-Rama.  It was great.  Charles Band and Jefferey Combs were supposed to be there and never showed up.  I was as disappointed  as that Ugly Betty actor was in his mom, granted I wont behead them with a samurai sword, albeit bad ass.  The whole night was great and I had a blast.  The highlight. Getting The Gingerdead Man box set. I of course already owned the first two but this was the only way to get part 3 for quite some while.  I passed on the first two to Gabe Nye the Science Guy who join me in this marathon although pretty much asleep the whole time. He was probly dreaming of the awesomeness that was on the screen in front of us.
I love this whole series but this is by far the best. There are aspects of the other two I love but as a whole this is the king.  Entertaining from start to finish with some brilliant references. An overall homage to Carrie with nods to everything from Citizen Kane(which is appropriate as this is the Citizen Kane of Full Moon) to Field of Dreams not to mention( I guess I am) one of the most amazing Porky's references the human mind can fathom.
Gingerdead Man travels back in time to hang out with sexy 70's roller skaters who like the Bee Gees way
to much.  He gets a cleaver and kills the shit out of many of them.  Basic? Yes but god damn amazing.  I hope this is not the last we see of the Gingerdead Man but if it is its one hell of a way to exit the series.


P.S.  Did I mention Hitler roller skates in this? well he does.

Tromeric
Posted by Guts and Grog Reviews at 2:23 AM