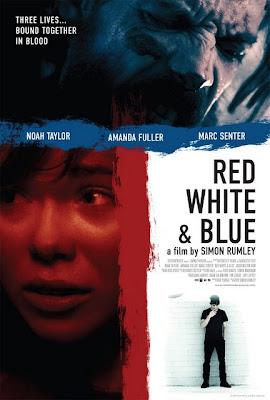 I am not gonna pussyfoot around. Red White and Blue is one of the best movies I have seen in a long fucking time. I am also not gonna hold back in telling you that it is also one of the most fucked up, brutal, insane, pain inducing films I have seen this side of Serbia.  There is no intro it just starts and at first the cuts are a little weird and off putting but once the film starts moving you care about as much as a frat boy cares about his sister fraternity girls butt hole, and that's not much just to be clear. It doesn't count if she doesn't remember,  right?
Red White and Blue is kinda like fisting a mentally handicapped pregnant woman, and not the nice way of fisting where you start with your fingers in a diamond formation but the hardcore I am gonna punch this prego sped in the clam kind of fisting.
As far as the technical bullshit goes, for being a film that I imagine was created with a pretty modest budget this delivers.  As I mentioned earlier in the beginning the editing seems a little off but by the end I thought it worked perfect. The lighting and sound are simple and fitting to the bleak world Rumley has created.  The music is fucking great, as I am sure many have noticed music is very important to me and can make or break a movie. Richard Chester has created a score that at its core is simple and subdued but builds into a massive off beat monster waiting in your closet when your four to show you what Mr. Hands felt. The acting is top notch and includes another amazing performance from Mr. Ray Pie himself Marc Senter. The effects are used in moderation but there are plenty of WHAT THE FUCK!!!! moments.
In closing Red White and Blue is a movie you must see.  I can't find one thing I wasn't happy as I assume the earlier paragraphs will reveal.  Things happen in this that I want to tell everyone about but I cant as that would be an asshole move, but seriously your jaw will drop.  This movie sucks you in and engulfs your imagination into seeing things that were not there. There is no good, no bad.  Nothing is sacred. Red White and Blue will own you and make you feel real dirty if you let it.