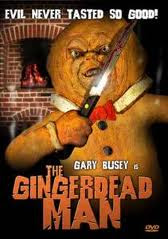 I was summoned out of my moms vagina already watching Full Moon movies.  If it had a toy or something small that killed I wanted to watch it, memorize it and quote it till my friends kicked me in the dick from irritation(which happened more than once).  After Full Moon lost their deal with Paramount I started to loose interest but out of loyalty still would rent pretty much everything they put out.  In 2005 I saw that Gary Busey was starring in a movie by full moon about a evil cookie.  I blew my load all over my grandmas Christmas cookies she was making. I had to have it. I went to the video store and grabbed it went home and had my mind blown. Well at least mildly amused.
You have seen this before. Whether it was Jack Frost or Monsturd.  Who cares it works every time.   A dude is brought back to life as some inanimate object and kills some bitches. If its not broke why fix it?  Criterion may not be putting this out but I will stand by the Gingerdead Man and pretty much everything Charles Band puts his name on.
Follow in Busey's name grab some friends snort a line, have a drink and engorge yourself with this cookie. You may shit all over the place but God damn it tastes good while your eating it.