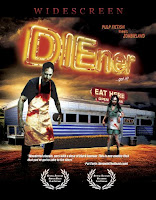 So I got real drunk and put this little gem on. I was expecting some garbage with a few redeeming qualities kinda like Retardead or something like that. I hit the play button after my fifth spider bite and the opening happened and I already knew I had looked at this all wrong. It's like when you wake up in the morning and the girl you brought home with you  is in the shitter and you have the moment of fear when she walks out assuming you brought home a yeti or some shit and then are pleasantly surprised when shes not half bad.
DIEner starts off with a back and forth between a South African waitress(I was sold just on the fact she was South African) and a traveler.  The back and forth is very believable and tense all at the same time which is when I realized I had judged this movie wrong. The traveler guts her and the cook and we get a sweet opening credit sequence reminiscent of a late H.G. Lewis movie.  Next up we have a couple who is fighting because they finally realized there is no such thing as true love.  There is some awkward back and forth between them and the traveler who is now pretending he works at the diner. Next up we have the sheriff who came straight off the set of Dukes of Hazard. Now all hell breaks loose as for some unknown reason everyone starts turning into zombies. They don't explain it and I am OK with that. I will quit there as the rest is better left to the viewer to discover.  The thing about DIEner is everyone in it is really good. I didn't expect that. The killer is reminiscent of Paul Rudd and plays his character right on the line of creepy and likable. He would make a great child molester. The couple is believable and pulls off all the tension and humor quite well.
DIEner is not a perfect film but put it in and you will be surprised at what they pulled off for what I am sure was quite the modest budget. There are worse ways to spend an evening and this one has no risk of and STD so thats gotta count for something.


Tromeric
Posted by Guts and Grog Reviews at 8:11 PM