Day five brings us the vampire. What a creature with a few exceptions the vampire is a douche with rapey eyes and bad hair. Vampires have become pussy's and spend more time molesting high school girls then they do drinking some mother fucking blood. In the beginning vampires were bad ass. Nosferatu quietly made it clear he wanted to suck all the blood out your body while Dracula looked out the window a lot and made it creepy. Here and there you get a gem like the Nosferatu remake, or some of the Hammer films adaptations or Bram Stokers Dracula. I would also include Daybreakers, Cronos and even Shadow of the Vampire, but like I said vampires have been overtaken by Mormons and born again Christians so it is not to shocking that they like to molest and be awkward.   Well rant aside here is my pick that I feel goes above and beyond any of the films I have mentioned or can think of. 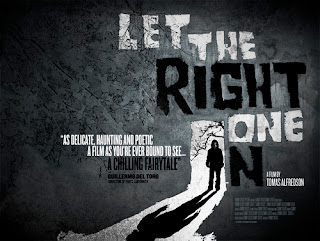 This movie blew my fucking mind when I first saw it. I couldn't look away. The children cast in it were flawless and it was better looking than any girl I have ever seen at 2:30. Every time I watch this it gives me chills and the end is fanfuckingtastic.

Tromeric
Posted by Guts and Grog Reviews at 3:34 PM