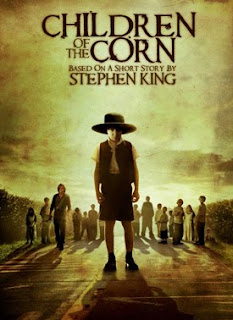 So this time around Linda Hamilton turned black and started dating pat smear the Soul Reaper, and Peter Horton is actually a international Spy/Terrorist. Dexter's Stepson Wears a hat that he bought at the state Fair's humorous giant hat booth. The married couple this time don't like each other that much which leads to some hilarious antics, and since hes a Vietnam vet he gets to have sweet flashbacks where the guy that did the effects for laser blast puts in his two cents. Overall this is pretty bad, but I will say all the Kid deaths are awesome, surprisingly brutal, snapping a fat kids neck and impaling a four year olds jugular is pretty god damn funny, and awesome, when the kid is hit by the car, wow...rent this shit and if you enjoy seeing kids get obliterated u can look past the fact that nothing that made the original kind of frightening or interesting is here, but like I said Kids get the fuck killed out of them.

Eric
Posted by Guts and Grog Reviews at 3:41 PM

Labels: horror, Made for TV, remake