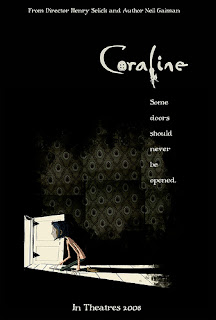 Its like Tideland without the heroin vacations. I wanted to watch this in 3D but Tony is Mexican and a pussy. Great Digital animation, way better than that corpse bride bullshit. Moments reminded me of monster house. which is as good as the burbs but this is not the burbs, Louis Lane is a bitchy useless mom, dad looks like eon from ghostbusters, fake dad looks like fat eon. Take s a whole 15 Min's to get going so if you are lazy like tony then that might be to long, but i thought it ruled donkey balls. Sweet as shit after sour tarts, the soft kind.

Eric
Posted by Guts and Grog Reviews at 2:24 AM