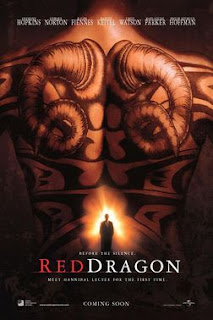 Silence of the Lambs is a masterpiece. Hannibal however was a steaming pile of donkey dick. So when I heard about Red Dragon I was excited but leery. Then I heard the man who brought us such turd’s as the rush hour movies I was even more hesitant. Low and behold I was pleasantly surprised. It went back to the original tone and not so campy, Riddley Scott should stick to movies with demi more about strippers, at least we expect for them to suck. The cast is excellent, everyone is on their game and the story its self is more interesting, I almost thought I liked it more than Silence of the lambs, but then after returning to that. I realized it would never be beat. Since then Hannibal rising has been released which ill stick right next to Hannibal, where it belongs. Straight up a lemurs recently felched ass.

Eric
Posted by Guts and Grog Reviews at 4:15 PM