Easter A Go-Go: A Story of Rabbits, Torture, and Booze 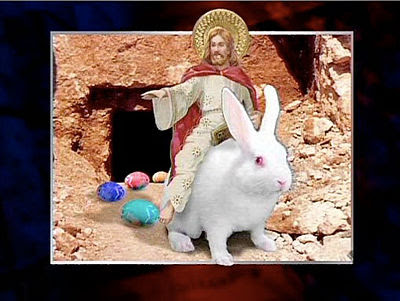 So Jesus may be my least favorite cryptozoological creature, I mean he ain't got shit on Bigfoot or  Chupacabra, but any excuse I can use for a marathon at the house of grog I will take advantage of like a Grandmother with alzheimers.  I wanted to do an all day/night marathon but by the time I got done serving people their bullshit Easter lunches and got home and got in the zone(sat on my porch with shots and smokes) it was already eight o'clock.  Peter Poison and I started off by giving ourselves res-erections with one of my favorite sequels that doesn't take place in college. 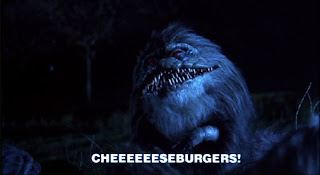 We meet Brad who has come back from the big city. Coincidentally the bounty hunters along with the town drunk Charlie are also stopping back in town to kill some mother fucking krites. We meet the townspeople who consist of Lipshitz from Whoopee Boys, Brad's grandma who teaches kids the right way to BM, the sexy small town reporter who in the words of Brad is "Jimmy Olson with breasts." Well I have a boner. These are just a few of the townsfolk. The town punk trades some eggs he found off the set of Poultrygeist for beer and Playboys because he knows what you need to survive. These eggs start hatching like an alligator in a sewer and the krites start unleashing their awesome. There of course are some casualties, not just the humans either. The krites have some pretty epic death moments. A dad steps on one of the eggs right before it hatches and it looks like the worst case of whiskey swamp butt ever, he isn't concerned though. He just thinks it's a Cadbury egg. That is just in the beginning. I will get to the rest. We gotta get back to the bounty hunters. They get suited up, and by that I mean turn into a Playboy model and yell "Kill Krites" a lot. The Krites are now causing so much tomfoolery you know shit is going down. They take over Shitlip's restaurant and turn it into their very own Good Burger. They love cheeseburgers more than those cat memes. Lots of them meet their demise here. One becomes licking good fried while one get's his hair shot off. While some take over the burger joint a bunch of others take on the rest of the town fucking shit up like they are the racoons from the Great Outdoors. This all just keeps escalating until we get one of monster cinemas best creatures. Critterzilla!
Critters two is one of my favorite sequels, in fact it is just one of my favorite eighties horror films. It is not perfect but the effects created by my favorite Killer Klowns are a blast, the story is fun and as far as Easter themed horror it is at the top of the list. That should be a special category in the AFI.

Now that Critters was over it was time to change the tone of things. We switched the disc over to the film that holds the award for most Jesus beating. The Passion of the Christ. Intoxication was fully set in by this point and the munchies(snacks not the Gremlins rip off) had set in. I attempted to make some popcorn but my drunk ass didn't bother taking the plastic off and just melted shit all over my microwave. I got my shit together and got some corn popped, grabbed some pop rocks and made another drink and sat down to watch this shit. 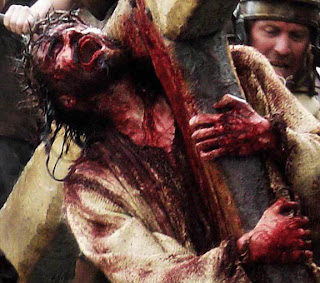 The Passion of the Christ- Mel Gibson

We meet Jesus in a set more fog machine engulfed then a youth group stage production. He is taken to the guys from the California Raisin's Christmas special where they tell him he is crazy and a blaspheme. He is then set upon his journey to carry a cross, get beaten more than a girl in a Max Hardcore film, be whipped so much that I kept waiting for the Romans to tell him his name was Toby, run into some creepy ass kids that chase Judas like it's Hostel, see what Zelda Rubinstein looks like as a baby and run into the devil who happens to be the singer of Midnight Oil.
The Passion is two hours of Jesus walking up a hill. It is like Lord of the Rings but more exciting. Along the way we also meet his mother who is a foot fetishist, Mary Magdalene who took a break from getting raped for nine minutes to be Jesus' whore and some of his disciples that sell him out quicker than a Mondo poster. Jesus just keeps getting beaten. Over and over. There is also lots of falling. He get's beaten then he falls. This film has more falling than a Julie Cruise song. This goes on and on with a couple quick breaks to teach us that Jesus built the table and his mom is a fucking idiot. This is all building to the climax which......Spoiler Alert. Jesus gets crucified, I am fine with Jesus getting crucified but did I really need to see his moose knuckle? After he is crucified they stab him just in case the hours of Jesus beating wasn't enough. That is a great moment as it reigns blood all over the crowd. This is where the film could of gotten even cooler but I will save that for another time.
All jokes aside the passion is an excellent film. It is beautiful, powerful and well shot. The effects are some of the best I have ever seen. While I gave up Dungeons and Dragons years ago I still can appreciate this as a great movie as powerful as it is exploitative.

At this point I am beyond drunk. I have left reality. Steph Infection shows up with Pizza and a "special" peanut butter that is exactly what I needed to add to the intoxication. Now that the Jesus beating was over, I had something in my stomach aside from alcohol and added peanut butter that would send me to a new land it was time for gigantic killer bunnies. 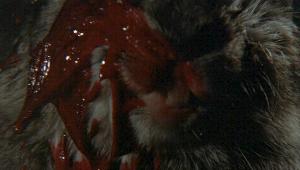 In this alternate reality where Janet Leigh survived the shower she has to take on a bunch of giant rabbits that have a taste for crayola crayons.
I love giant animal movies. It's no secret. This is one of my faves. They use cutting edge technology known as the mother fucking zoom button to create these beasts. These giant rabbits wreak havoc on everything from horses to Warwick Davis' house . They chase trucks down(where was the "objects may be closer than they appear" joke?) and get shot with paintball guns as if it was Friday the 13th part 6.

This was  a perfect way to end the night. I wanted to keep going but to be honest by this point I wasn't even sure what planet I was on. Next year I will have to start earlier so I can add Easter Bunny Kill! Kill!, Jesus Christ Vampire Hunter, Subconscious Cruelty, and Begotten to the Easter fest.


- Tromeric
Posted by Guts and Grog Reviews at 2:51 PM

I just gave you an award: http://www.fullmoonreviews.net/2012/04/full-moon-reviews-is-now-4-years-old.html