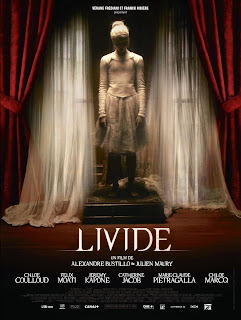 I have been waiting for this longer than Monica Bellucci was waiting for the rape to end in Irreversible. Inside gutted me and I have been patiently waiting for a follow up from these madman of France. Well it is here and it is about as different as James Earl Jones and the other James Earl.
The plot is basically like City Slickers two except instead of looking for Curly's gold they are looking for a dance teacher's(who happens to be in a coma)treasure.  Lucy tells here degenerate boyfriend about the treasure and he and his friend convince her to take them there. They break in and shit gets real.
Livide is shot with the precision that it would of taken Lee Harvey Oswald to hit Kennedy from the observatory if that was the case.  That is for another time though. What I am saying is this is beautiful. Not surprising after seeing Inside. Every scene is a painting that was given more love that Van Gogh's prostitute. The acting is excellent across the board with Chloé Coulloud as Lucy being the standout.  She sells every scene with her eye.  The music is perfectly executed and the effects while not as bloody and grotesque as you might expect from this duo are fantastic and effective and have plenty of gross out value.
Livide is a perfect follow up. It is nothing like Inside and that is a good thing. Inside is one of my favorite films of the last decade but if they had just tried to rehash it they would have to change their names to Zombie or Roth. They have made a fantastical supernatural film with nods to Halloween three and an overall tone that owes itself to another French god, Jean Rollin.

Tromeric
Posted by Guts and Grog Reviews at 5:45 PM

fully agree with your review, a great Freanch horror-flick from 2 extremely talaneted directors. Very excited about their future projects!