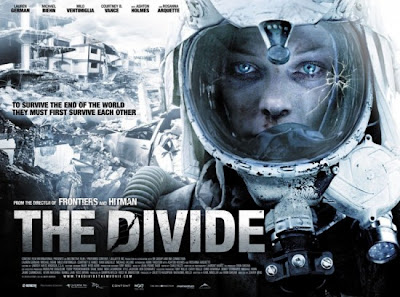 I love movies that make me feel empty inside. I can't explain it, it is just something that works for me. If a movie can cause me to abandon all hope for two hours the chances of me liking it are pretty great. Well The Divide left me feeling more empty than a thirteen year old's ball sack after he found his first Hustler.
No time is wasted to start this. It opens with New York being destroyed as if Roland Emmerich directed a film with Lars Von Trier as the cinematographer. We now find a group of renters in the basement of their building trying not to emulate  the victims of Chernobyl. That is the set up and then the next two hours you will witness their downfall. Groups are formed, minds and fingers are lost and chaos ensues in almost a surrealistic fashion.
The Divide is beautiful. It looks and sounds like what I would assume a naked beautiful angel  sounds like when she is singing the most beautiful song you have ever heard in the King Diamond falsetto. I found myself hypnotized by the long epic panning shots and then pulled back to reality with a quick punch to the soul.  The storytelling is thin using mostly montages that Stan Busch had nothing to do with to give some view into what is going on inside everyone's head. The effects are mostly subtle but effective with a few stand up and clench your whole body moments.  The acting is pretty top notch with all of the main cast nailing their roles and pulling off the believable yet outlandish characters.
In the end The Divide will  have you curled up on the floor, crying and wishing for death, but with smile.

Tromeric
Posted by Guts and Grog Reviews at 11:09 PM

The Divide wasn't exactly my cup of tea. Boring, no tension and packed with annoying characters - meh.
I prefer Xavier Gens' Frontier(s).

I actually didn't really like Frontier(s). It had its moments but overall I wasn't a fan. To each their own of course. I had heard lots of negative when I saw The Divide so I think my expectations where low so I ended up really liking it. Not my favorite or anything but still enjoyed it.