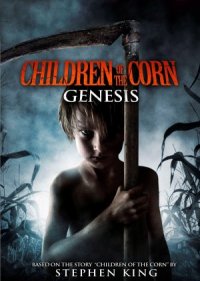 Not counting the remake this is the eleventh Children of the Corn film. That is insane. Why Children of the Corn? The first one is good for the time and due to how much I loved it as a kid something I revisit from time to time. Cool idea and the kids are creepy. The sequels are all pretty bad. Some of some fun moments but nothing about them screams more.  I mean Freddy didn't even get eleven films for Christs' sake. Well I guess it doesn't matter why it happened because it did.
The movie starts off with a soldier returning home to find his family dead. Then what looks like a kid from every Japanese ghost movie strobe moves at him and throws a crucifix at his face. We then jump ahead to a couple who has some car trouble, never heard of that happening in a horror film. Well they go to the first really creepy house they can find and ask for help. Billy Drago took a break from getting Aids for Greg Araki to be a creepy ass preacher who is married to the kinda hot chick from Hostel.  The couple ends up having to stay the night as there is nothing open if bum fuck scary town. Now it is time for weird shit to start happening that will raise their suspicion but not enough to do anything.
This may be one of the most pointless sequels ever made and that is saying something as I am comparing it to nine other Children of the Corn sequels. It is called Children of the Corn but has only a couple of them and it is never made clear if they even have anything to do with the chaos. They try and elude that the one kid that is kind of shown is basically Carrie White but it becomes pretty convoluted with all the other "twists" that they shove down your throat like that Sasha Grey movie I saw.

Tromeric
Posted by Guts and Grog Reviews at 6:58 PM

I had a Children of the Corn marathon last October. Watched the first 7. Most were ok. Part 2 was really funny in its badness, part 3 was batshit insane I thought. I loved part 3. Part 4/5/6 felt like Hellraiser 5/6/7. Then part 7 was ok, it had Ironside in it so fuck yeah. Haven't seen the remake or this one yet. But I own them and I'm sure I'll watch them soon.