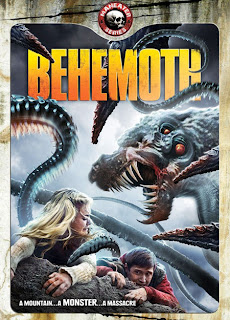 Mr. Gable is doing a MANEATER week over at his place. What else do you do for fourth of July week that doesn't involve wanting to get out of taxes and covering blankets in smallpox?  I myself can't think of anything so of course I jumped in, as any chance I get to watch shitty movies with shitty animals that fuck shit up is right up my alley. So up my alley we go.
MANEATER is basically the asylums retarded little brother on food stamps, and I don't mean the new hi tech credit card style. I mean old ass monopoly money food stamps. If you haven't figured out what I am saying it is that the MANEATER series is basically amazing.
Behemoth is a disaster movie with a gigantic Graboid Medusa monster causing quakes and making the CW"S guest star line ups boobs to shake. A whole lot of other TV actors round out this cast of badassary, most notably William B. Davis who doesn't even smoke one cigarette.
MANEATER like the asylum are not necessarily "great" films but they are super entertaining and they have so much heart Harry Warden is probably nearby waiting to give them the pick axe. Recommended only to people with severe problems that enjoy fun shitty sinema if that's not you I suggest you get a wrench and unscrew your asshole a bit because it is wound up tighter than that "special" kids toy he got from McDonald's.


Tromeric
Posted by Guts and Grog Reviews at 9:48 PM

Labels: Creature, Giant animal, horror, Made for TV, So bad its Good

That is greatest thing I will read all day.

Thanks for participating. The world must realize that if they do ANYTHING this Fourth of July weekend...they're fucked.

(On a side note. I like coming to this blog. 60% of the time the Halloween theme music is playing. YES!)

wanting to get out of taxes and covering blankets in smallpox

On the 4th I tend to get drunk and shoot off fireworks in the yard while yelling NO TAXATION WITHOUT REPRESENTATION and REDCOATS GO HOME, but I don't think the neighbors appreciate my adherence to historical accuracy.

I almost watched "Behemoth" for Maneater week... I kinda wish I did. Mine was good though, but everyone loves a behemoth.