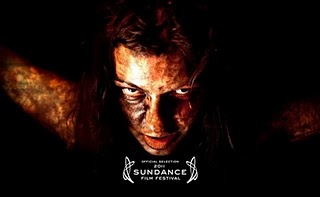 Go find the video of the dude freaking out at Sundance over The Woman. This guy is a douche. You know it right away.  There is no way any movie can be this bad.  I love Lucky McKee. I love Jack Ketchum. I have been waiting for this for a while now.  Offspring was great I read the book in one sitting and the movie while low budget was a good effort. This however I had high hopes for.  Did it live up?  Well read the review you fucks.
The follow up to Offspring which was the follow up to Off Season which was never made into a  film.  This Bill Paxton look alike sees a hot dirty cannibal wackadoo bathing in the river. He captures her and chains her up and gets his family to help teach her the ways of the world.  That is as much of a plot synopsis you will get from me.
I won't lie, for the first half hour or so I was a little worried that I had built this up to much.  I wasn't sure where it was going and I had my doubts.  Then all of a sudden this took my insides and ripped them out and they pretty much stayed there for the next hour.  Everyone has seen the guy at Sundance freaking out and throwing a hissy about this. Well if he would of just been patient he could of maybe been stoked like I was.  Yes it starts out a little slow, yes at first you feel like the worst person ever and if someone walked in they would think you were the most misogynistic person on the planet. Well be patient you fuck it will get better.
Once this was over I was literally jumping up and down with excitement. The beginning is important as it makes you appreciate the end that much more.  It is like when you take a girl home and you have whiskey dick. At first she is trying and trying and working it so hard but it seems like its pointless.  Then out of nowhere it hits and it is the best thing that has ever happened to you, you just keep getting more excited till you can't hold it in anymore and next thing you know she looks like the girl from Flashdance.

Posted by Guts and Grog Reviews at 3:25 AM